I can not believe this... 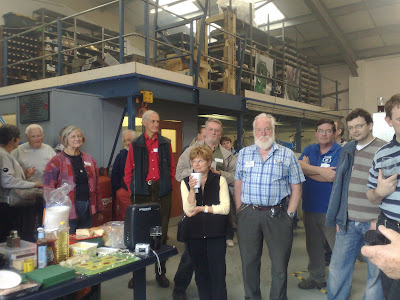 We have had a lovely day. We went off happily this morning to the RN open day, there to meet Steve who is returning our pistons, liners and con rods. It was a bit disappointing to discover that Compo wasn't there but apparently he has been getting his knees done too. But it was nice to meet up again with Brian and Allister and David of RN, and drink some rather nice bottle conditioned specially brewed RN beer. There was a barbecue too, at first just inside the works, until it got a bit smokey. The works was looking pristine and Brian's speech made it sound as if there are exciting hings happening there. For a start they are in the process of producing an engine which isn't destined for a boat, but for a domestic combined heat and power unit, that will run on almost any sort of oil. I do think it's still a bit optimisic though, to think that we'll all be able to run our boats on chip fat and waste engine oil, because once the raw suff has run out, I think we'll be at the end of the queue for the substitutes.

Then Steve followed us back to Bill Fen and finally saw and heard the engine in action, and stayed and chatted for a while, then Kevin and Vicky came over, and then Simon and Anne (the Moomins), and then Steve went home and we went over to Melaleuca to look at Simon's engine and couldn't drag Jim away. Then finally we came back to Warrior, sat down with a cup of tea, and I said, did we get our bits back off Steve before he went then?

Now how the hell did we manage to forget that, the entire point of the exercise? It kind of puts forgeting oner liner in the shade.
Posted by S at 7:42 PM