The river at Lewes 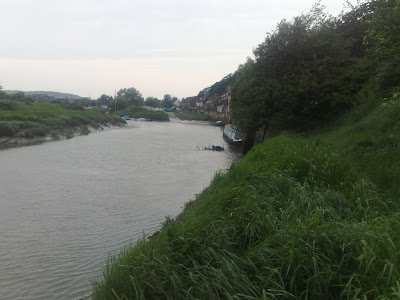 We went into Lewes last night. Ostensibly, we were going to check out the Snowdrop, our formerly absolute favourite pub, now under new management having gone downhill and being closed for a while.

We didn't need to go in though; the sign outside saying 'DJ tonite'; the tracksuited clientele getting out of their souped up Astras outside, and the range of shiny new lager taps glimpsed through the window were sufficient to prevent us wasting our time and energy (and hope. Farewell Snowdrop; you were a lovely pub, but to everything its season. I wonder what's happened to the bust of Plato, latterly covered in glitter, which used to grace the window.)

However, my main reason for driving into Lewes, rather than patronising the Prince of Wales, our genuinely local local down the road, was that I wanted to get a closer look at this narrowboat moored on the Ouse near the pub, which previously I had only seen from the train. Walking a little way back along the main road Baz and I were able to find a path down the riverbank, from where we could just about see the boat. More exciting was to recognise the scene from that picture I mentioned a while back of a sailing barge in the early sixties. We were standing at almost exactly the same spot as from where that picture was taken. The gasometer has disappeared from the background, but much else remains the same, and the narrowboat is, I think, tied up to the same wharf as the barge was. How they get on and off other than at high tide is a bit of a mystery, but I must say I do envy them a bit. They're almost in the heart of Lewes, secluded from the road and pretty much the only boat on the river.
Posted by S at 10:45 AM