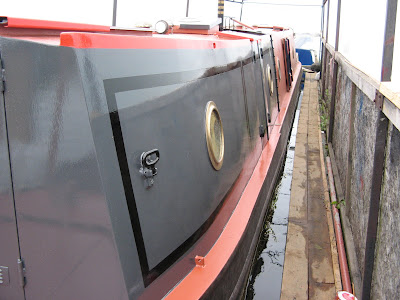 I'm back in Ramsey and I've bought the horrible weather with me, contrary to what the forecast for here promised. Still, no matter that it's freezing and pouring with rain, because Jim has done an amazing job over the last ten days with the painting. I really can't believe the time and effort that's gone into the three extra undercoats and the three topcoats, including stripes that had to be masked separately with every coat; the handrail, the hatches various, the elephant's toenails at the front and loads of other bits, in this paint dock which must have been like a greenhouse in last week's heat. So naturally I was very impressed when I turned up last night.

Work continues; even as I write Jim is giving a second coat to the roof hatches. These are red; I'm not 100% sure about the red myself (shades of the saga of the injectors); it has turned out to be a particularly virulent vermilion which is great for the handrail but perhaps best in small doses, but he likes it and as he's done all the work, who am I to argue. I am certainly more sawyed by the argument that he likes it than by the other one he's proffered, which is that we've got a whole tin of red paint and need to use it somehow... 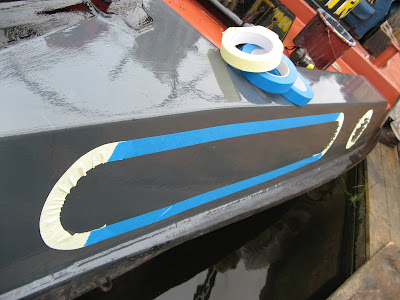 This morning I helped mask up the fore end with some special bendy tape I bought on the offchance. We are going to have the name on there (sorry Dave); technically we need it for the Thames and it'll be nice to have it done properly. I think it should look nice too. I'm not quite sure what the objection was; whether it was a matter of aesthetics or convention, but I can't really see a problem on either front.

Anyway, having done that I was ceremonially handed a tin of blacking and an old brush and reminded of my vocation. All very well but this was the final inch and a half of two year old blacking, with the consistency of black treacle - until I got it slapped onto the boat, when it suddenly developed the ability to run quite fantastically. Still, I know my place, and didnt rest until the entire contents of the tin (at least, those that still moved about) were transferred to the hull. I have a feeling that were this boat's steel to mysteriously be vapourised by some kind of alien deathray (hmm, apart from the baseplate) it would continue to be perfectly serviceable as a boat made entirely from paint and blacking. 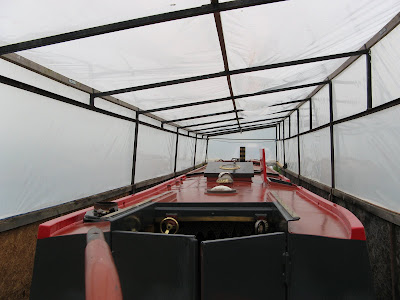 Tomorrow we vacate the paint dock - which has actually worked very well. Then at last I'll be able to see Warrior properly, from a distance, in all its new glory. And be able to light the fire.
Posted by S at 3:32 PM

In a month or so's time, I'll be blacking the hull of what will soon be my boat, Lucky Duck! Any tips?