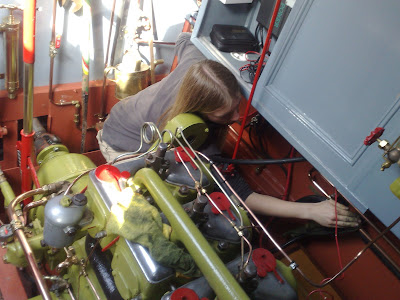 And it's raining, although it was sunny when we arrived. Quiet sounds of cheering have reached us over the course of the afternoon, from the boules tournament, and Sebastian has been over and reported that there is a marquee, with beer (and, Jim adds, cider, which Baz is quite partial to) and a large barbecue waiting to be fired up. Slightly worryingly, this was before the heavens opened so I'm not sure what the barbecue situation is now. Also, we forgot to bring Baz's sleeping bag or quilt, but he assures us that he will be all right with two blankets.

As Steve is coming to look at the engine tomorrow, the first job was to clean and polish the engine room, and the engine itself. I bravely led the way, and polished about two things, before generously allowing Baz to take over. He has done all the brass and copper and Jim is now in there doing the engine, I think. I have to do the blog now because Brasso Boy needs the laptop on so that he can charge his ipod.
Posted by S at 6:01 PM