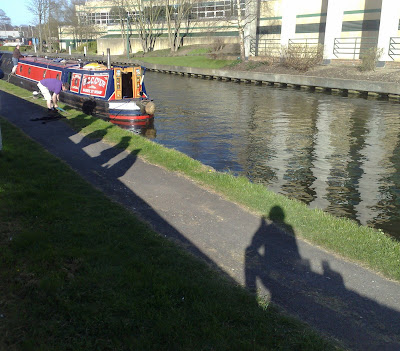 It can't be often that someone decides on a whim to go to Uxbridge for the evening, especially when it involves a two and a half hour train and tube journey each way, but hey, that's the kind of mad people we boaters are. We had long known that there was going to be a CWF 'banter' (these get togethers seem to be becoming more frequent of late) and that Moomin and the Ducks and various other luminaries were going, but we'd decided to give it a miss and save our pennies for the forthcoming holiday. But then, like all the best decisions, we thought, oh what the hell, let's go after all. So there was a mad dash to catch the train, as we hadn't noticed that the start time had been moved from three to six o'clock.

No matter, we got there at about half past four and strolled up and down the towpath in the sun - yes, the SUN! - for a bit, then sat and had a quiet pint, and then the Cambridge contingent arrived, closely followed by about thirty other people in the end, some of whom we knew - it was particularly splendid to see Bones and Maffi again - and some we met for the first time. Not many had come by boat but there were a few tied up outside, including Derri's rather wonderful Carribean Broads cruiser, and a RN DM3 being run on waste oil of various sorts (we saw him pouring in old chip fat as well as the much blacker stuff) using RN's heating and filtering system.

Moomin was delighted to hear that I, being the last person in the household to hold out, have finally abandoned Windows for Linux. It wasn't that I liked Windows; rather, like I suspect about 99% of users, I was clinging desperately to the familiar no matter how awful it was - and mine, after four years, was pretty dreadful. So the other day, when it absolutely refused to connect to the internet, I finally got round to backing up all the photos to DVD and let Baz wipe the whole thing and install Ubuntu. So far I am very impressed. It's not just that it's quicker and cleaner, but it does - even to someone who's very used to Windows - seem more intuitive and simpler. The installation went without a hitch, and Firefox, for example, was ready to go without any further setting up.

I am still slightly wary of OpenOffice and its compatability with MS Office - I'm currently writing the PowerPoint presentation for my conference paper on Tuesday and having seen the changes it made translating into OpenOffice from my Windows machine at work, I'm a bit worried about what it's going to do when I try to transfer it back again in front of a room full of people. Also I miss the keyboard commands which don't seem to work - but maybe I just need to use different keys?

On the plus side however, it has an excellent version of Tetris, so I never need be gainfully employed again. And - see the photo at the top? I decided that I wanted to crop it a bit, something I would normally summon Baz to do, but I thought, this is all new to all of us, so I'll see what I can do, so I rooted around for a bit, and found something called Gimp, dragged the photo into it, messed around for a bit, and presto, I worked out how to do it. Hours of fun beckon.

Although having said that my desktop computer is once more refusing to communicate with the wider world, whilst all the wireless jobbies seem quite happy to. So perhaps it has its wires crossed.
Posted by S at 6:09 PM

Hullo Sarah
Re your problems with steering, etc, I have written out some helpful (hopefully) comments / tips as a pdf. How do I get them to you from Oz?
Regards
Andrew

a delicious surprise to see you both at the banter!

hey Sarah - would like to contact the RN DM3 running on chip oil man!! (was it Brian from RN?) I've been thinking about that for mine....
Regards
Steve

Hi Steve
Have you already spoken to Brian (no, if you had he'd have sold you one already!). He has the prototype I believe, but this was Strads - you could contact him through CWF.