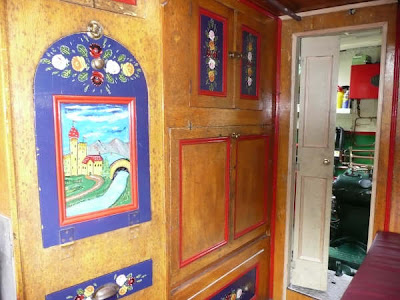 Day one - Aylesbury to Berkhamsted

I arrived early to meet Chiswick on the towpath opposite Aylsebury Basin, despite having done my usual trick of wandering around for ages having missed the most obvious route. Just as I drew near, with perfect timing, a side hatch flew open. 'Hello', I said, 'I'm Sarah'. Thankfully James, for it was he, seemed to know who I was talking about and I was welcomed on board by Bob and Esther who were making bacon sandwiches for the assembled crew - today, the four of us plus Gabriel, a Tarporley stalwart. Not too soon after this we set off down the Aylsebury Arm, me and Gabriel lockwheeling. Staying ahead of the boat was not too onerous, at it was apparently very shallow. I would just like to put on record now that of the sixty two (or was it sixty three?) locks we went through, approximately three were in our favour, so I have had a good workout.

Anyway, I like doing locks, which is just as well as the weather was not too great on Friday, very damp, and the towpaths were seas of mud. Bob and I both managed to roll about in it a bit (separately) and I was quickly annointed with mud and grease in the proper fashion. So we proceeded throughout the morning, until at lunchtime Gabriel and I were ordered inside to take our sitting for lunch - potatoes baked and pies heated in the Epping stove. Two more locks passed while we ate, and then it was back to the fray.

I wasn't keeping records, but I think it was about half past seven and twenty nine locks later when we arrived at Berkhamsted and tied up outside Waitrose. After a good dinner cooked and served by Esther, we prepared to hit the town; i.e. I put my unmuddy trousers on, and having all changed into our gladrags, we rolled up our trouser legs clear of the mud and set off to find Berko's nightlife. Well, I wanted to go to the Rising Sun, of course, and eventually we did get there, having paused to examine briefly two other pubs on the way (The Boat and one whose name eludes me for the moment) which were heaving with young people - who'd've thought there were so many. The Rising Sun by contrast was just nicely busy and, wonderfully, was pretty much as it ought to be; cream painted T&G and anaglypta ceiling, looking like it hadn't changed in decades, except for the wire pig attached to the ceiling that is.

After a pint it was time to go back to Chiswick and inspect my quarters for the first time. I only subsequently realised the James had given up the back cabin for my convenience, but I'm afraid once I'd tried it I was ready to fight off all comers, I loved being in there so much. The stove was gently burning away in the corner (my wet boots tucked beneath it), the slide was open to regulate the heat, the cross bed was very comfy, the air lightly scented with diesel and, in short, it was absolute heaven.
Posted by S at 3:38 PM

I eagerly await your account of the following 3 days.
The best weekend I've had in ages!
Love Penny x