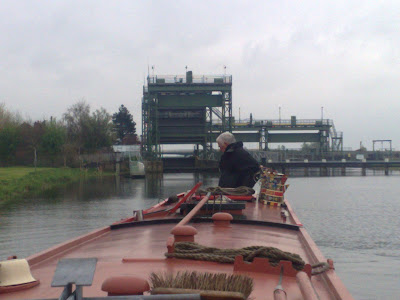 Yesterday, Whittlesey to Dog in a Doublet, and back to Peterborough.

Jim thought he saw a coconut floating in the water. This might be a common sight in the Midlands or Leicester, but I didn't think Hindu funerals had made it out this far, and sure enough, on closer examination it turned out to be a dead hedgehog, which was a lovely start to the day.

We arrived at Stanground early for our passage at ten, and were locked through by the lovely Tina, third generation of her family to be lock keeper here, then bid farewell to the Moomins who were heading up the Nene out of Peterborough, whereas we planned to go down. First of all we had a splendid EA pumpout (rather guiltily, completely free this time as we are licenceless). This must be one of the best ones going, very efficient, and at the risk of anthropomorphising it, wonderfully enthusiastic. Say what you like about the merits of pumpout vs. cassette, there's something quite satisfying about a good pumpout. Oh, sorry, is that just me? (Also of course, and for me this is the clincher, it's not either/or; if you have a pumpout then you have both and thus are adapted to all emptying opportunities that might present themselves).

Moving on - as we did, under the solid white sky - we headed off down towards Dog in a Doublet. This lock onto the tidal Nene takes its name from the local pub, supposedly named thus when an eighteenth (? I'll look it up in a minute) century landlord's dog's hair fell out and he made it a natty little coat to keep it warm (or possibly to conceal its embarrassing skin complaint). It must have caught on, because I'm pretty sure there's more than one pub by that name in the country. Of course I wanted to visit this legendary inn, but was doomed to disappointment, as like so many, it was boarded up when we arrived. 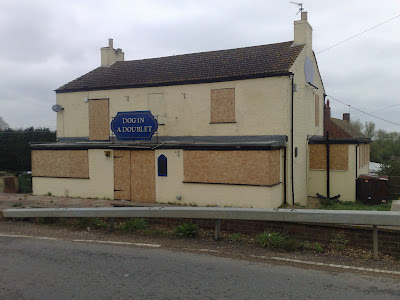 The five mile stretch was not fatally boring - come on, we've done the Hundred Foot Drain - and wasn't even as straight as it looked on the map. For one mile just out of Peterborough there is no speed limit (moored here in the past we have been entertained by jetskiers, but not today), and for the rest it is 7mph so on the way back (Jim steering of course) we gave the engine a good workout and made the five miles in forty minutes.

Back in Peterborough we went for a wander around the city, and it was much nicer than I remembered it from a previous visit by road. The fact that it was Easter Sunday probably helped; the shops were shut and the place was almost deserted and it was so much easier to notice the many old and handsome buildings that line the streets. All this to a soundtrack of cathedral bells. Only one shop was open - a recruitment agency, advertising for 'English speaking packers and line workers... Register today, work tomorrow' which was not only open, but doing a roaring trade, with people queuing up inside and gathering in knots outside, and not speaking English.

Then we returned for another quiet evening around the fire. I finished reading Stuart Maconie's Adventures on the High Teas (not nearly as good as Pies and Prejudice, I didn't think), and we tested out the new bed, specially made for Craig, that occupies the whole of the back cabin, and pronounced it to be most acceptable, although I still prefer the basis cross bed, but I can afford to, being on the short side.

This morning, the sky might be described as 'white with a hint of blue', which augurs well.
Posted by S at 7:28 AM

Many years ago my daughter in law's parents ran/owned the D in D.

I learnt from some of the locals it was sold a couple of years ago and the new owners wanted to extend it. When they were planning the extension the surveyors found that it was all on the move and not worth doing anything to.