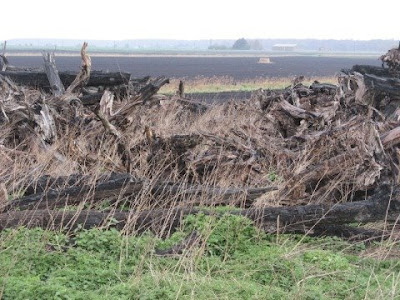 Yes, I know it's the wrong side of the country and no doubt looks entirely different, but that was the first thing that came into my head upon seeing this scene. Where are we? Somewhere on the Nene Old Course, headed not towards Floods Ferry and March, but the other way, on our way to Holme Fen. Yep - intrepid or foolhardy, we have decided that this will be our first holiday adventure. Hopefully at this time of year there will not be so much weed. That's what we thought when we tried it one Christmas, but there was still a lot of dead weed hanging about then, and you may recall, we never made it as far as the winding hole at the end but had rather a long reverse out.

We've stopped here for the night as Moomin says it's the last nice-ish spot, and it was, of course, raining. It started just as we untied to leave Bill Fen, soft wet rain. I just spent three days in Manchester and it didn't rain once!
Posted by S at 5:09 PM