Meanwhile back on the Grand Union 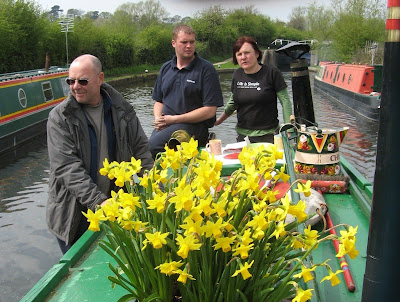 I dunno, you go for weeks without a decent thing to write about and then two (nay, possibly three) come along at once. Back to my weekend on Chiswick...

So, I awoke before the assembled throng on Saturday morning, and volunteered to go to Waitrose. This I did, albeit a little redundantly, as later we all went again, this time with me absent mindedly armed with a windlass. Advised by Penny (for it is her calling) we purchased vast quantities of wine, plus a second consignment of Magnums (posh choc ices on a stick, that is, not of champagne), Esther's previous intrepid experiment having demonstrated that they kept very nicely thank you in the fridge's ice box, and James having missed out on one the previous night on account of it having been Bob's birthday.

At some point in the morning we set off, and at some point later I was invited by James to take the tiller. I cannot really do justice to the way this felt - it really was a dream come true; a perverse desire I've clung to for a few years now. In the meantime I've had goes on Northwiches large (Tarporley) and small (Warbler), and set foot on at least two other big Woolwiches, but this was the first time I'd got to steer one. Just as you chose your football team at an early age and then have to stick with it through thick and thin, even as you discover that there are others that are handsomer, faster, better, I'll always be in some deep corner of my heart a big Woolwich girl.

And it felt fantastic. I'm no natural steerer (I may have mentioned that?) but it felt as natural and instinctive as anything else I've steered; you know how some things just feel right. Its size and heaviness and solidity didn't make it harder; somehow it felt more instinctive rather than less. And I have to give credit to James who seems to be not only a born boatman but a natural teacher too, for his patience and encouragement; and I hope I've remembered the tips he passed on.

Then we stopped for lunch, washed down by some of Penny's wine, and I thought I had better quit while I was ahead, and found other things to do to while away the afternoon, involving scientific trials of different sorts of metal polish. Ah yes, I forgot to mention that we were joined this morning by John and Jane as well as the aforementioned Penny, so had a sizeable crew. We overtook the day's schedule and tied up we knew not where, only that it was somewhere short of Kings Langley - it was only on consulting parish notice board the next morning that I identified it as Abbots Langley.

Well, we enede up in a pub which I have to say is not the sort of establishment I normally frequent, although it didn't look too offputting from the outside. I think it was called the Dog and Partridge, and if not that, then something similar. It had no proper beer (but just about scraped by with bottled Bombardier), large television screens showing a constant succession of what to my untrained eye looked like porn models gyrating to what I presume must be the latest happening sounds (is this the current state of popular music, I ask myself), and, somewhat disturbingly, a golliwog hanging behind the bar. Now, I am not one to take offence on others' behalf at the mere existence of golliwogs, but I think hanging one behind your bar must be intended as some kind of statement, no? And I fear it can't be a particularly savoury one. Add to this a friendly but still rather intimidating young Staffie who begged for crisps with an impressive repertoire of tricks, and a pool table so tatty they didn't care what you did with it, and a liberal attitude to closing time, and you will see we had the ingredients for a fine old night.

So off to bed it was at one, and I awoke at five to the birds singing and the church bells chiming the hour, and I just lay there all cosy watching the sky lighten through the open slide and thinking how incredibly bloody lucky I was.
Posted by S at 9:33 PM

I hope the golliwog was merely hung and not hanged! (Isn't English a wonderful language?)

Yes it was... I think had there been a rope I might have made my excuses and left. That would have been lynched though, wouldn't it?

You can't let our fine night out in the Dog & Partridge pass without mention of the one handed pool. That was the highlight of the evening!