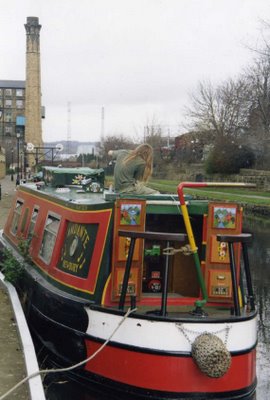 Andante a long way from home ...

Apologies to anyone who asked about Andante and got ignored; what happened is that I accepted an offer on her months ago, but didn't like to say anything until it was all done and dusted for fear of putting a jinx on the whole thing. Well, the money's not quite in my hand yet, but the buyer's cheque has cleared, so it looks as if it's safe to talk about it ...

It is of course rather sad to part with Andante as it was very much my boat, and my home from home in Huddersfield - but the nice news is that she's going back to the Kennet and Avon, where, apart from cruising and my briefly kidnapping her to the frozen north, she's spent her whole life. She's not going to be lived on any more, so I see it as a sort of semi-retirement (at the grand old age of 20). I haven't met her new owners, but I hope they'll take good care of her. (I know I'm shamelessly anthropomorphising here, but bear with me, I got very fond of the old girl).

Our original plan had been to sell Andante ourselves, the same way we bought her, via Apollo Duck. When Jim suggested bringing her down to Stretton and getting Keith to do the selling, my initial reason for agreeing was for the sake of the trip. But with hindsight I can see that this was a very good idea; it would have been an absolute nightmare trying to deal with potential buyers with the boat 400 miles away. We would never have got the price we did if it hadn't been possible to get work done there and then (new shower tray and pump, new toilet, repairs to the rudder, and finally (no previous owners having been bothered) getting the oil pressure guage to work; not to mention the shotblasting and painting (apparently the buyers really liked the look of her in her grey undies, but as we'd already bought the green and red paint they are going to use it). You wouldn't get that sort of service from a standard brokerage, I know (and I don't suppose they'd light the stove before people came to view either), and I'd hesitate to place a boat in some of their hands, but I'm very happy that we made the right decision.

Brokers do get rather a bad press, often, I expect, deservedly; so do estate agents. But I have to say that my experiences of both have been very largely positive. When we bought our little GRP cruiser, Helyn, it was from Penton Hook on the Thames at Chertsey. We almost didn't go in, it looked so overwhelmingly upmarket. At £5,000 (we eventually paid four), she was the second cheapest boat there; some were 100 times the price. But Darren the salesman could not have taken more trouble with and for us if we had been buying one of those gin palaces. He took us out twice, gave us loads of advice both in person and over the phone, and even lent us a Thames map after we bought her. What's more, they were happy for us to keep her there for another six weeks as the mooring was paid for - which they needn't have told us.

And I've also known estate agents who were genuinely nice and caring, who, when No. 1 Husband (hmm, that has a good ring to it), very tiny Number One Son, and I were taking our first tentative steps onto the property ladder, gave us loads of patient advice and help, not to mention emotional as well as practical support when a purchase fell through. But I suspect that, in 1985, they were the last of the old school (still, hats off to Bradley and Vaughan, sadly no more, of Haywards Heath).

But back to the point: goodbye Andante; it was nice knowing you. Keep an eye out for her Mike, and say hello from me when you see her back on the K&A! 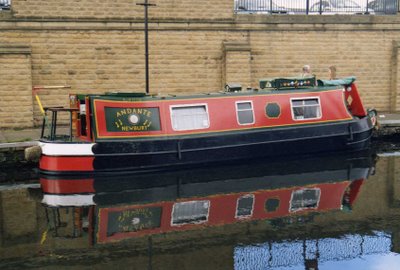