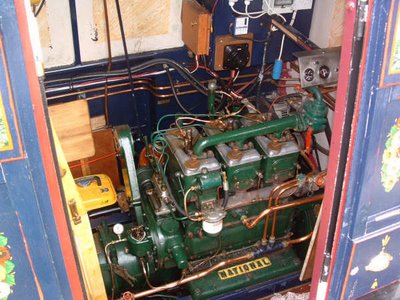 Our booking confirmation for the RN rally has just arrived. Never mind that while I filled in the form, and I signed the cheque, the confirmation is addressed to Jim - bless their traditional little cotton socks (and woolly beards). The exciting thing is that we are (touch wood) going to spend a weekend of fun and frolics in the company of like minded engine enthusiasts, drinking beer and participating in various useful workshops. I have signed up for all the workshops except flower arranging (excuse me?), including, with some reservations, diesel engines for ladies. I have overcome my reservations about this using the same arguments as are made for single sex education for girls, i.e. that we will be freed from stereotyped expectations and thus better able to achieve our full potential without loads of blokes shouting out the answers and putting us off. We shall see. Also, I have signed up for crochet, which I think will be an even bigger challenge.

But here's the thing: it's the Russell Newbery rally, and our engine's a National. We National owners are a sort of subset of the RN Register (the owners' club), just, I suppose, as the National engine is a sort of subset of the RN. RN licenced their engine design to National in the early 1930s, so while at that time they were almost identical, over the years, as the two companies developed them in different ways, they diverged. By the mid/late thirties, when our engine (and I suspect most of the Nationals still in use) was built, there were already some significant differences. Nonetheless, the similarities and common background mean that RN engineering were the obvious choice to rebuild our - and quite a few other - National engines, hence its lengthy sojourn in Daventry.

But I still feel a bit left out. The RN Register produce all sorts of RN merchandise, but supposing a National owner were naff enough to want a window sticker, or a mug, or, heaven forbid, an item of clothing, featuring their beloved engine, then they'd be out of luck. I would guess that most (all except ours?) Nationals in canal boats today are fitted in historic boats, particularly the restored GU boats that originally would have had them, and that the owners of such boats are (quite rightly) above such things. But there's a little, shallow, part of me that wants to announce to the world, look, I might not have a Big Woolwich, but I do have a really rather impressive engine ... And, also, to fly the flag for National, to spread the word beyond the cognescenti that there was this enormous enterprise called the National Gas and Oil Engine Company of Ashton-under-Lyne, who powered most of the biggest carrying fleet on the British canals yet now seem to have a very low profile, partly because of being re-absorbed into RN.

By the way, if we ever acquire a small hairy dog to take boating, he will be called Natio, pronounced Gnasher, in their honour. This is unlikely to happen in the short term as we have an awful lot of cats who wouldn't appreciate canine company. But every now and then we see a likely looking terrier, and cry 'Look! There's a Gnasher!'
Posted by S at 9:50 AM