With brass knobs on 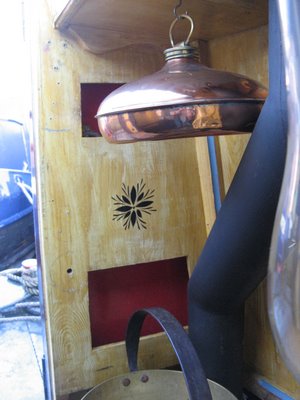 Just got back from a very productive weekend on Warrior, and pausing only for a nice bath (well, after four days of doing the bare minimum required by polite society - remember, we still have no running water - the neglected bits in between deserve a soak and a scrub) and a bite to eat, here I am back at the blogface. Lots of photos and progress to report once I get them sorted out.

Last night I removed all the brass knobs from by the stove in Warrior's back cabin. I know it's 'traditional' to have a row of old doorknobs by the door, but I think that only applies when they're nice, preferably old, found objects - not to lacquered brassette mock-Georgian crap from B&Q. So I took them all off, and despite the plethora of screwholes, I think it looks better for it. I shall keep my eyes open for really nice replacements. One other 'traditional' thing I haven't got in the cabin is ribbon plates. I just don't like them. Sorry. In most other respects though it's a pretty standard pastiche, not just for the sake of it, but because those are the elements I do like.

I got to look at some really nice graining yesterday, and was subsequently struck by how comparatively rough and crude Warrior's is; still, it is Warrior's and that's good enough. What is annoying however is that some former owner decided that it would look nicer with all the framing - which I'm pretty sure was originally also grained - painted blue, and didn't even do it very neatly. Just as soon as we get something to play it on Jim will be studying his Tony Lewery video and getting his combs out.
Posted by S at 7:41 PM

Just a quick note Sarah, the brass knobs which adorned working boats back cabins were not door knobs but in fact the brass knobs off brass bed steads. There are quite a few companies selling very good reproductions copies at most of the larger boat gathering/rally/events. But you are right there is nothinglooks finer than a row of four shiny brass knobs to reflect the glow of the open door on the range or the light from the hanging lamp on the side of the table cupboard.