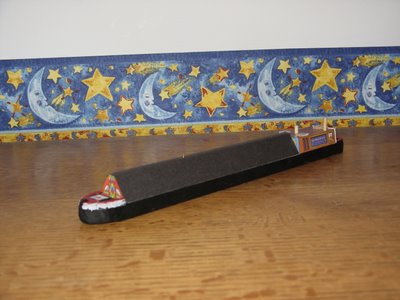 In his Christmas stocking (what do you mean, nearly seventeen's too old?) Baz got a model narrowboat kit, purchased on Santa's behalf at the London Canal Museum. And here is the finished article (less rope. Haven't worked out how to attach the thread yet). I do think that for £3.99 it's a bit steep that he had to cut the balsa* to shape himself, but I suppose it's all part of the creative challenge. In his own refinement, he even cut away a few millimetres under the counter.

The pack says it's 1:72 scale, and at about a foot long that would seem to be right, so it should fit nicely on his 00 guage railway ... This railway layout started about twelve years ago, with a little Hornby starter set one Christmas when the boys were young. It quickly grew onto a 6' x 4' board, and we all had enormous fun setting it up (my speciality was the cardboard buildings kits) and even playing with it occasionally, but then, ten years ago this year, we moved to our present abode, and somehow never got round to setting it up again. The poor boy's been very patient, but has rather plaintively asked if it can be set up as his birthday present (for next month). How could we refuse?

And this time it will have a canal too (we were originally going to have a river but I suspect a canal might actually be easier). It really brings home how big the boats are when you look at the model next to a locomotive or a house of the same scale, in a way that is somehow less noticeable in real life (most likely because you don't see them in such close proximity).