Under the engine room floor 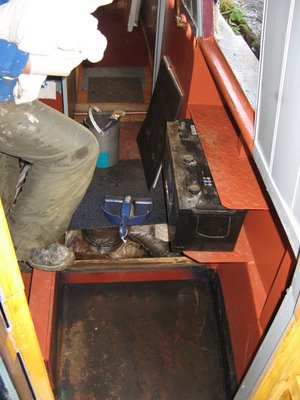 As promised, the latest instalment of progress made on our last visit to Warrior: three weeks ago now, so must be due up there again soon! Under instructions from Paul the electrician, Jim is building a cupboard to house all the electrical switches and fuses neatly, and work was started on that. We have some nice doors that will be rigged up as sliding doors across the front - we can't have conventionally opening ones because the throttle control lever is too close in front of it. Then above the doors, which aren't the full height of the cupboard, will be a panel with nice brass vents in it, which were taken off Andante's rather pathetic fake pigeon box.

More excitingly, with the help of Aaron, we also took up the engine room floor - and good thing we did too, as it was very wet underneath. We're pretty sure that that's as the result of rainwater coming in through the holes where the panel in the roof (through which the engine goes in and out) is bolted on - since the engine came out it hasn't been properly sealed. We were always intending to lay a new floor in the engine room, albeit originally over the existing one, using narrow hardwood decking that we bought on spec a few years ago. The new plan entails removing the existing floor and building a new one a few inches higher (still using the hardwood) creating a large enough space underneath for our new, improved, battery bank. This will be more accessible, and allow for more/bigger batteries. Previously the start battery was in its own box behind the engine; we can now have a bigger one, hidden but still more accessible, and have more space to get around the engine. Similarly, the leisure batteries will be much easier to get at than they were under the floor beneath the bed cupboard, and we free up storage space in the cabin.

The main reason we bought Aaron with us was because we foresaw that there would be ballast under the floor that would need moving - there was, and it was wet. Warrior has very good ballast, and no one is quite sure what it is - wish we knew as we'd like to get some more. It's in bags of around 1 cwt each, measuring about 16 x 8 x 6 inches, and looks like very small discs (about 3mm diameter) of something like stainless steel. It's very heavy and quite easy to handle (provided you have a certain level of muscle). So this was all removed, then the space cleaned out and allowed to dry, before being painted with two coats of micacious iron oxide paint. The batteries will sit on rubber mats with a wooden framework to prevent them moving or falling over - not that there's much space to do either. Needless to say, the old floor was very strongly built and fixed, and had to be sawn through in two places and taken up in sections.
Posted by S at 6:52 PM

My guess is that the ballast IS stainless steel, probably made up of all the bits they punch out when making graters, colanders, washing machine drums, etc. Guess someone will know where to get waste stainless steel ballast, but I don't!