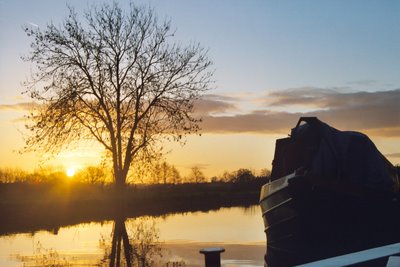 I like taking photos. I started when I was ten, with my mum's old Box Brownie (and it was old, even then. It wasn't all that long ago that I was ten.) The first photo I took was of a horse, on a shcool trip to a local farm. I only managed one on that occasion, as it was horribly cold, and Siobhan Winters and I had to be tucked up in a shed with blankets and an oil-filled radiator until our mums came to get us. The following summer I took the camera to the Norfolk Broads, and got the picture below, which I'm still rather pleased with (it won second prize in a school competition!). I don't know what length lens the Brownie had, but I think I got a lot closer to that swan than was altogether wise.

The first camera I bought was a second hand 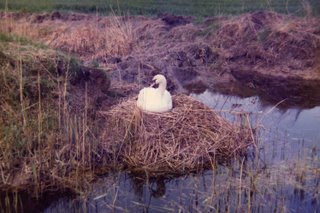 Instamatic - don't think I took a single decent picture with that, though the disposable flash cubes were rather fun, if slightly scary to a sensitive soul like I was. I got my first SLR when I was about fifteen; I think it was given to me by a gentleman friend of my mother's. It only had one lens, but that was 50mm, so basically WYSIWYG for the first time, and the whole thing was a revelation. I had great fun with that, and got a few tips and read a few books, and then, when I was seventeen, finally bought my first new camera, a Practika BX20. Cheap, because it was East German back when there was still a Berlin Wall, and old technology, but basically good quality; and I still think one of the best purchases I've ever made.

And then last July I got the Canon Powershot for my birthday. It's been great; I've got loads of good pictures that I wouldn't have got any other way, and I couldn't blog without it (well, I could, but it would be very dull. What do you mean, it's very dull anyway?). But it isn't a substitute: it meets an almost completely different need. One day, I suppose, I will have to get a digital SLR for the times I want to try and do arty-farty stuff; they're already getting more affordable, but all the time film's available, what's the hurry? There would be an enormous instruction book to read. I like the simplicity of my old, old technology. I'm happy to embrace new stuff, but strictly on a need-to-know basis.

Anyway, the point I'm getting to is that I've set up a new album for pictures taken for their own sake, including ones where I'm trying to be clever (and sometimes it nearly comes off), and ones that might be cliched, but what the hell, they're pretty. All but the first one were taken with the Practika, and none of them has been enhanced, cropped, Photoshopped, or otherwise fiddled about with in any way.
Posted by S at 5:05 PM