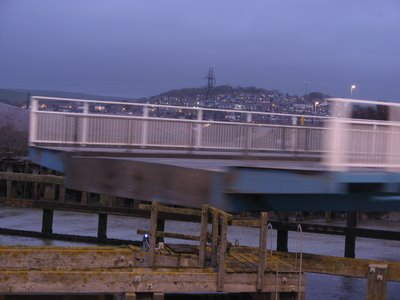 Another Newhaven post (next Warrior visit is next weekend) but it does feature the river and, the bane of local motorists, the swing bridge. I went and watched it opening to allow a ship in this afternoon, and was surprised to note that the whole process took only six minutes from the traffic being stopped to when it was allowed through again. Sometimes it must take longer, as the traffic has been known to back right round the ringroad and up the Lewes and Brighton roads. It's nice to think that there's something which takes priority over road transport, albeit occasionally.

I have, thanks to my father, a souvenir brochure produced in 1974 when the present swing bridge was opened. It is, however, written in the style known locally as 'Newhaven Historical Society' (a half page feature written in the same style appears in the Sussex Express every week) and it is thus quite difficult to glean usable information from it. It has some lovely adverts though, including one for Thorn radiograms, which were apparently made (built?) in Newhaven at the time.

The 1974 bridge replaced a previous swing bridge which was opened in 1867. That in turn replaced a Georgian (the booklet gives no date) toll drawbridge, that appears to have opened in the middle like Tower Bridge. The 1867 bridge was opened using a capstan, operated by eight men. The town's gas main was carried across the bridge, and the supply was cut off whenever it was opened - and this was until 1974.

The current bridge is of course operated electrically, and the gas has been found a new route (presumably under the river along with the water main). It pivots round against the east bank, allowing ships through at high(ish) tide to access the North Quay. Today it was a ship called Torrent, unusually, London registered. No idea what it was loading/unloading, but it could have been loading scrap metal, or unloading stone or granite, or aggregates. 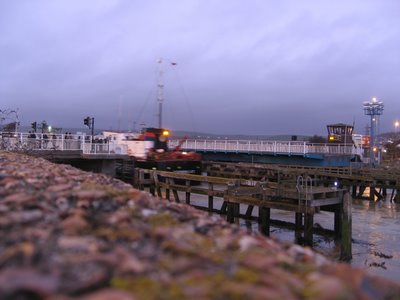 Not great conditions for taking photos, but at least it prompted me to start to experiment with the little digital camera a bit. The results aren't great, but I haven't had much practice yet.
Posted by S at 7:09 PM