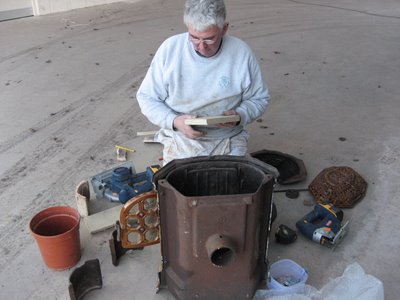 We have had a bit of a saga with our saloon stove. Initially Warrior had a Morso Squirrel, but this turned out to be beyond repair, burnt and rusted through at the back (despite looking shiny and new at the front).

Many years ago now, while browsing the antique shops of Lewes (something it appears we spend far too much time doing) I was arrested by the sight of a gorgeous enamelled French stove. I sat down beside it making small whimpering noises and refused to move until we'd bought it. It then sat in our kitchen for a few years, waiting for us to get round to plumbing it in, which we never did; basically it was just a big ornament.

It had all its internal parts, and as far as we could see at the time, all it needed was new mica for the windows. However, when we took a closer look with a view to installing it in Warrior it became clear that all was not well. There was a big crack in the cast iron back, and the firebricks, although all there, were badly broken. It really seemed as if it wouldn't be realistic or economic to repair it. But, I'm somewhat ashamed to admit, at this point I started to whimper again, oh, couldn't we just try, couldn't we just see if someone could weld the back/supply new firebricks/make a chimney to fit its non-standard French outlet ...

Well, we did, and so far it seems to have been successful, although of course we won't know until we actually try to use it, after all the work has been done. The crack has been welded, and the rest of the casting has so far held together. Last week, Jim turned his attention to the firebricks. We sought advice - and parts - from Stovefinders, who were very helpful. They suggested that the firebricks, which were curved to fit the oval inside of the stove, be replaced with vermiculite sheeting. Apparently this is now used in modern stoves too. The sheet is about an inch thick and comes in foot squares. It's not hard to cut, but tends to be crumbly, and to get the right shape for our stove required a lot of mitring. In the end we gave up and went back to the original firebricks, sticking them together and building them up in situ using tubes of fire cement (Pyruma Flue Cement, and Geocel Fire Block Seal). 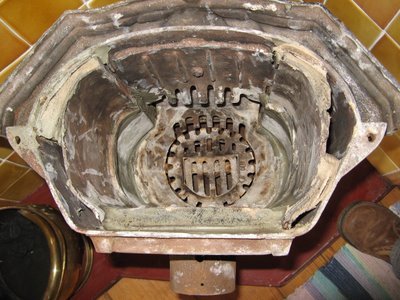 So those are the biggest jobs done. We have the mica sheet to replace the windows; Keith is working on making us a chimney pipe; we just still need to get the stringy stuff but that can't be hard as they use it in Squirrels. Because the flue comes out of the back rather than the top, the stove will have to sit further forward, meaning that I've needed to tile the whole of the walls behind it as it will all show. No problem, except I'm three tiles short - the lovely yellow tiles we've used were originally intended for Andante, and I'd assumed when I started using them on Warrior's larger hearth that we could leave the bit that didn't show untiled (it does already have steel sheeting and heatproof board behind, so the tiles are purely aesthetic). Naturally, the shop where we bought them has changed hands and no one knows who the supplier was ... Still, a minor niggle in the scheme of things, if the rest of it does all come together successfully. Fingers crossed!
Posted by S at 2:58 PM