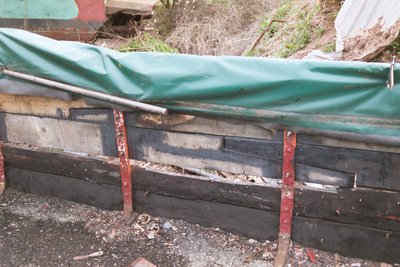 Oh, a disjointed ramble tonight. I've been interviewing would-be part-time Politics lecturers all day; I managed to drop a cup of hot chocolate that I was holding - just holding, not trying to do anything ambitious (e.g. drinking) with - all over me, my fellow interviewer and all our paperwork, my brain is crying out for respite, and yet still I determine to bring you my thoughts on a delicate, nay, controversial, issue. Instead of, as you might have preferred, Warrior's new cabin curtains.

A couple of days ago I stumbled into a fight, now happily resolved (it was all a misunderstanding), which opened up all the old issues about whether old wooden boats are ever really restored or whether, as the only bits that seem to endure are the non-wooden parts, we should really be talking about them as reproductions rather than restorations. And I think that the answer to that one is that I don't really care. A reproduction is better than nothing, and nothing is the only alternative, because for all its virtues, wood is inherently not a very durable material, at least not in close contact with water. I agree with the point that Andrew makes (see first link) that it would be nice to see old boats left old and unrestored, but that's not an option; after a while they simply won't be there any more.

Up at Stretton, a stalwart couple called Martin and Chris are 'restoring' Heather Bell (photo above, taken last Easter), which I think from memory was the last wooden working motor (narrow) boat ever built. This means all (perhaps not quite all, I should have paid more attention) new wood. It is an immense task, and their achievements even just in the time we've been there are awesome, and I wouldn't put my head above the parapet and say that it wasn't worthwhile; I think is most certainly is (mad, perhaps, but worthwhile). Anyway, how much of an unrestored boat is 'original', assuming that it was constantly repaired and maintained throughout its working life? Like the Roman's axe, which has had three new handles and four new blades over the years: is it still the same axe? (Perhaps that thread of continuity is the answer...). Martin also told me last week that it was a common practice to take wooden boats that had reached the end of their useful working life and burn them, reclaiming just the iron parts to be incorporated into a new boat. Presumably this wouldn't then be considered the same boat.

This dilemma is most acute when talking about wooden boats, but also applies to iron/steel/composite ones. Often it seems, beautiful restorations start life as little more than the sides of a hull, sometimes only one end or the other, sometimes not even clearly identifiable. But if that provides the inspiration to recreate a boat the lines and dignity of which we see so rarely, then that can't be bad.
Posted by S at 8:56 PM