Atherstone, my kind of town 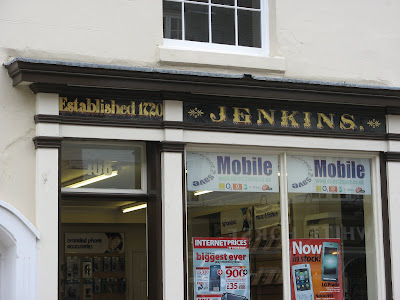 I went into the town yesterday and had a good look around, and it has a really good, old fashioned high street, with two butchers, three bakeries, banks, a post office and a variety of other shops, including a Viking office supplies outlet, a few beauty parlours, at least three of those cheap hardware sort of shops (very useful) and the lovely mobile phone shop in the photo. There's also a small Somerfield in the high street itself, and a Co-op 'superstore' (rather touchingly so named, I think) and an Aldi just about on the end, but hardly out-of-town. Oh yes, and three charity shops, including two for local hospices, which doesn't fill one with hope for the residents of the area, but netted Jim a great pair of new boots. And a farm shop and two off licences.

But the thing about it is, of course, that it's like stepping back in time to the days before superstores took over the country with their illusions of choice and cheapness. Whenever I'm in a new place (this goes back to when I was going to job interviews all over the country) I think 'could I live here?' in terms of 'could I enjoy shopping here?', and I think I could really enjoy shopping regularly in Atherstone. It's very unflashy and unglitzy, but seems genuine and, hopefully, sustainable - although I have to say it wasn't exactly heaving with customers. All that and the canal too.

Things have been picking up a bit here today with more people arriving; a great many with dogs various and one with a cat. People have started coming to look at the engine, including the RN top brass, who got stuck straight into it, and Warrior has had a few compliments, which has done much for my view of human nature. I am still deeply perturbed, however, by the fact that the man who is co-ordinating the moorings for the rally is called, not as you might imagine, the Moorings Co-ordinator, but The Harbourmaster. I don't know why they don't just get him a cap with some gold braid and call him the Commodore, frankly (although he is doing a great job, but we must be about as far from the nearest harbour as it is possible to get).

Tomorrow we have to sign up for the workshops, which I think I've rather lost enthusiasm for. Do I want to display my woeful (lack of) crocheting skills to the world in general? There is a session on 'Boat Electrics for Ladies' (why you need a really expensive inverter to run your hairdryer. No, really). As there is no equivalent session for blokes, Jim wants me to go along as a kind of fifth columnist and report back, but I don't think I can face it, so I've said he can borrow my dress if he likes.
Posted by S at 8:46 PM

Hi Sarah.
I am really enjoying reading your Atherstone posts, as we also enjoyed the place when we moored their. I to love the older places and the history. The charity shops in any town are always our first port of call.
Lets ope the weather stays good for the weekend, and lots of people come and have a look over Warrior.
When we did Preston brook a couple of years ago, they had Harbourmasters, and I asked "Where is the harbour". Your right it is a little odd.
Good luck with the workshops... I did the stern gear one with Tony Brooks, which was questionable as to whether he was correct on his packing method. Keith and I also did the Roses painting class, which was great fun. Make Him go in a dress and do your class, no one will know hehehehe.
How nice seeing Jubilee laden down, she quite often moors at Canal Cruising when work needs to be done. Thea was at the Etruria Festival last weekend, helping out with Saturn. I to was helping out at the festival.
Have a fantastic weekend.
Jo

sarah, be very careful about this course, its in all probability been devised by a male, and the obvious intention is to shift the blame to the female ( since she's now the expert, having done the course) as to why the engine wont turn over in the morning after a mammoth tv/ washing machine/ microwave/ and all other accessory battery draining session the day before ! Martin

Good thinking Martin. I also note that most of the sessions are about two hours long and this one is 45 minutes - our butterfly minds, eh?

sarah,,,
well that proves it, theyre just allowing you enough knowledge to fulfil the requirements of ,,,'a little knowledge can be dangerous'
and on your way out you get handed the 'fully competent' certificate, dont under any circumstances accept this,,!! glad you had a goow W/end, i'v been tryin to contact compo re enquiry on gas , I'll try to phone him this week, see ya, martin

Don't know what the form is regarding making comments on a three-month-old post is (I guess it doesn't really matter, but will you see it?) - but I want to say how much I'm enjoying reading your blog, Sarah. (Only, er, three months-worth to go now.)

I love the idea of a mobile phone shop established in 1726!