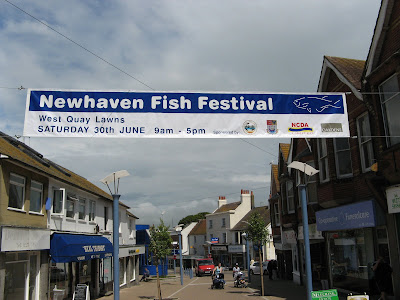 It's nice to be home, but I'd rather be boating. Still, Braunston next weekend; that's something to look forward to - then look what a treat awaits the following week. Or possibly not.

I've never been a big fan of fish, either of keeping them in tanks (they usually die on me, or the cat gets them), catching them (pointless, and at the very least less than kind, if not actually downright cruel), or, indeed, eating them (bony, and they taste of fish). But of course, Newhaven is, still, up to a point, a fishing port, and it's right that this should be celebrated. I may have to go along just to see what form the festivities take.

The West Quay is quite sanitised now (it has lawns, for a start), compared with how it used to be (i.e. very fishy) when I first came to Newhaven. There's a lot of new housing been built down there, and the fishermen have been corralled into a single building and the landing stages gated off. I believe there's even a facility for tourists to watch the fishermen at work through a large window ...

My favouritely named fish related business is (or maybe was, I haven't checked whether it is extant) the Newhaven (Sussex) Fish and Flake Ice Society, which somehow always gets rendered (on the numerous occasions on which people discuss it) as the Fish Flake and Ice Society. Fish flakes - now, would you have them for breakfast or tea?
Posted by S at 7:47 PM