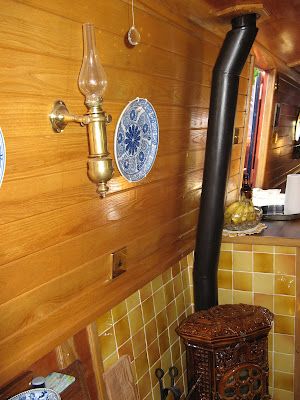 Time to catch up with all those little bits of news and pictures (desperately trying to spin them out) that got bypassed in the excitement of cruising to Atherstone and the rally.

Remember the saga of the French enamel stove? Firstly, repairing the cracked casting, then rebuilding the firebricks inside, and replacing the mica in the door and the sealing rope. Then there was the problem of connecting it to the existing hole in the roof, whilst sitting it on the existing hearth, despite the fact that it's a completely different shape and size from the Squirrel that previously occupied the space. The hearth (which I didn't have the foresight to take a photo of) was made of steel with an upstand around it, and when we put the new floor down we shaped it around this.

However, the French stove has to sit further forward because of its flue being at the back, and we found a splendid fender in an equally splendid antique shop in Brewood which extends the hearth just enough - but to make it look nice, Keith had to cut away the side extension of the hearth (I hope you're paying attention), which he achieved with minimal collateral damage (other than the mysterious disappearance of some rather tasty wasabi peanuts), and Jim used the last two offcuts of the pitch pine flooring to fill the gap. You can see the join, but it's a neat one. 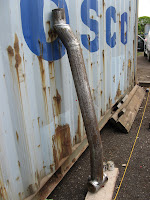 The stovepipe itself is also a testament to Keith's skill and artistry - here it is in its entirety before I painted it. Of course, we still don't know whether the stove will actually work; will it draw? Will it get hot? And it isn't really the weather for trying (and we haven't actually got it securely fixed down as per regulations yet either). So the story isn't quite over. But at least it looks nice.
Posted by S at 6:15 PM

Wow that stove is beautiful, and worth all the effort. I hope that when the time comes to light up it works like a dream, then all the hard work will have been worth it.

Enjoy your week, hasn't the weather been wonderful?