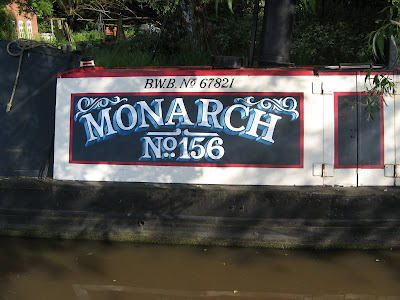 Which is as things should be, really, isn't it. No disasters, no narrow escapes. Saw a few nice old boats - but haven't seen any new ones to rival Warrior yet (in my totally unbiased opinion). We've had a couple of compliments on the engine - but more for the tunnel light, which I guess vindicates Jim's attachment to it (I initially thought it was a bit too big and flash, but have to admit it looks great now it's on).

We set off this morning at five to eight and tied up at twenty to six. We're on the Coventry now, somewhere past bridge 88. It's very nice and peaceful, most of the time, but having successfully avoided a road (having been lulled to sleep last night by the M6) we discover that we're right next to a railway line (look at the bloody map, woman). Never mind. We stopped just the once, in Rugeley, for provisions, where to my joy I discovered a branch of Wilkinsons and bought a broom and a mop so we can keep the boat looking respectable.

I've been doing a lot more steering today, and though it may not look very pretty I haven't hit anything (or, ahem, gone aground). I love the speedwheel control, compared to the Morse on Andante; it's a lot more subtle and falls very easily to hand. But I still get to do most of the locks - it's about the only exercise I get - and am getting back into the swing of it: sunburned, bruised, aching, exhausted - this is the life!
Posted by S at 7:18 PM

Hi Sarah. It sounds like you are having a wonderful time, I am jealous lol. We cannot wait to get going, but with all things patience is a virtue, and she is worth waiting for. Awww you passed Monarch at Fradley. I don't suppose Viv was onboard?
I quite like Rugeley, that is where we got Paddy from at the Border Collie Rescue. Ohh what wouled we do without a Wilkinsons, my favourite place to shop when we are out. We have used them alot over the past few years.
I enjoy the cruise to Coventry and into the Basin, even aving been shot at, it never puts me off LOL.
Continue having fun and I will keep popping in for an update..... Jo