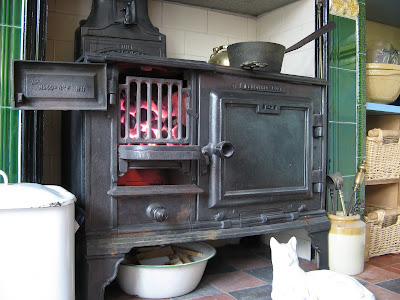 It is indeed June the 29th, and this is the stove in my kitchen (the one that displaced the French one that is now on Warrior), lit. OK, it's not that cold, and it's not that wet, compared to other parts of the country, but it was miserable. I wouldn't normally be able to remember what the weather was this time last year, but because we were working on Warrior then that acts as a reminder, and it was very hot. Very, very hot, all through May, June and July. I remember sitting in my stuffy office in Huddersfield counting the days until we'd be leaving on Andante (that itself nearly a year ago now). And of course, as soon as I finished work and set off in early August, it rained and rained, for ten days of the eleven day trip.

So I am now living in hope that a rainy June presages a sunny August, or our planned trip to St Ives will be neither pleasant nor easy (and perhaps not even possible). We're firming up the timetable now. Passage booked across the tidal Ouse for August 16th at 1130; train tickets to Atherstone bought for August 3rd; return ticket from March for Baz on the 13th, as he has been invited to stay with a friend in France. So we plan to leave Atherstone on the 4th and hope to have some spare time either side of the 16th to revisit the Middle Level - including the all important trip to Warrior's birthplace at Ramsey - and to explore the Ouse, where we will meet up with my colleague Rosie, who lives near Cambridge and whose partner, delightfully, is called Jim, so how could we not invite them aboard?

Hopefully by then the rain will have abated, the Nene will be passable, and the aftermath of that train derailment at Ely will have been cleared away. We've received our IWA 'pack' and our mooring (inside! of six!! Hooray!!!), so all we need to do is get there.
Posted by S at 11:12 AM

I am so glad to see the back of June, lets hope July is better.
Oh wow I so love your range. It reminds me of the one in the Good Life LOL, now I am showing my age hehehehe.