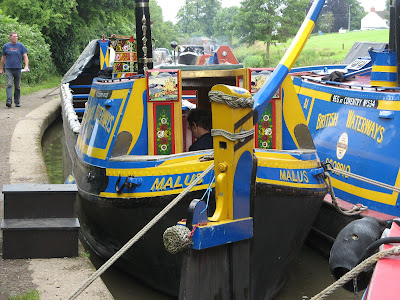 And not just because it rained so much of the time. Over on Canalworld, Paul H provides, from memory, the following list of historic boats present at Braunston this year:
Adamant, Arcangel, Atlantic, Barrow*, Bream (stern end), Brighton, Buckden, Callisto, Camel, Clematis, Columbia (stern end)*, Corona, Cyprus, Darley,* Denebola, Dodona (bow end), Dover, Empress, Enterprise, Gambia, George, Gifford, Gorse*, Gosport, Grange (bow end)*, Grimsby, Hadley, Hyperion, James Loader, Jubilee, Kangaroo, Kildare, Laplander, Leo*, Madeley (bow end), Manchuria (bow end), Marquis, Mary, Minnow, Monarch, Nuneaton*, Nutfield, Olive, Pelican, President, Raymond, Renfrew*, Saltaire*, Scorpio, Sculptor, Skylark, Stamford, Star, Stour, Sweden, Tarporley, Thea (bow end), Tug No 2, Vesta, Vulcan, Warbler.
Someone else added Panther, and I was proud to be able to add (not only seen with my own eyes, but remembered too!) Rudd, Lupin, Lamprey, Plover, Dory, Badger, Cassiopaeia, Malus and Swallow.
The ones marked * are ones I don't remember seeing (and it seems that Leo maybe wasn't there but Paul was thinking of Malus) - the amazing thing is how many I do remember. That makes a total of 70 (69 if you discount Leo) out of the 74 that I heard tell were there.
Now, lets sort them by company, builder, class ...
Posted by S at 1:36 PM

How many had national engines

it was so wonderful to read about all the historic boats at the rally, reading the list of names and knowing some of them, gave me a warm glow.
You have such a wonderful way of writing Sarah.