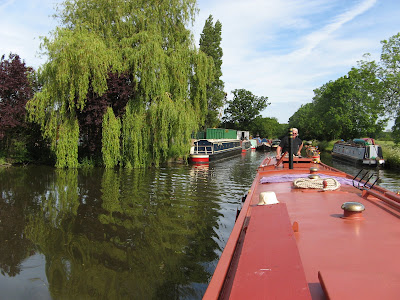 We actually launched on the planned day. We left Stretton (Warrior's home, and, it sometimes felt like ours, since Easter 2006) at 9.50 this morning (after ceremonially relaunching by chucking a pint of rather cloudy Harveys dregs over the fore end) en route to Atherstone for the Russell Newbery rally this coming weekend. We've decided to curb our ambitions and eschew the BCN this time, and have so far retraced in reverse part of last year's trip in Andante.

Tonight we are tied up just below bridge 89 on the Staffs and Worcs, following a generally very successful day's travelling. The only hitch was getting stuck on the mud shortly after joining the S&W, just south of the M54. We were stuck solid, for the entire length of the boat, for the best part of an hour; one atempt to pull us off was entirely unsuccessful, but a second good Samaritan had a bigger engine (a Lister SR3) and a much better idea of what he was doing and we were finally off again. It brings it home to us how deep drafted Warrior is (about 2'6 Jim reckons); we had a few other scrapings of the bottom but didn't get stuck again. The engine behaved impeccably, and the stern gear is bearing up well.

Congratulations to you both for getting underway. I know we are looking forward to getting underway.
Good news Sarah, we have our Keb. The blacksmith boat came past to Lime Kiln Lock with Astra. The Langit Company, Oldbury. He had on board an old Eliza Tinsley Keb, which will look the part on Hadar.
Happy Cruising and lets hope you do not get stuck again LOL.