I have no excuse for not posting from Warrior other than the general torpor that engulfed me shortly after climbing aboard. I proved to myself yesterday that it's perfectly possible now, provided one ritually sacrifices a saucer. Of course, I didn't realise at the time that the photo had uploaded, as I had forgotten that I had asked Baz, as I usually do, to get the laptop to not download pictures or software updates when I'm doing the coffee spoon bit with the megabytage. Then I looked at it on my phone later and there it was. I note also that using the laptop appears to have had a somewhat deleterious effect on my spelling...

You may recall that we were planning to start painting Warrior 'at Easter'. Easter dawning as it did in somewhat Siberian fashion, this was deferred to this week, and indeed, when we turned up the weather looked set fair. We has planned to buy plastic sheeting of some kind for the paint dock before leaving home, but sort of forgot, and I said, oh what the hell, I'm sure we can get some there. Fortunate as it happened, as when we arrived it was to discover that the previously resident Bill Fen painter, who had been living in Spain for a few years, has returned for the summer, was in the process of repairing and sheeting up the frame, and had lots of work lined up for it.

Naturally, this information represented a bit of a blow to our plans, and one of us in particular (to paraphrase the wonderful Nancy Banks-Smith, who I think in turn was paraphrasing someone else, it is not difficult to distinguish between a ray of sunshine and Jim with a grievance) was struck quite miserable by the prospect, but I said, let's wait and see, who knows, things may turn out for the best (then I whistled a happy tune etc.) and lo they did, I think, insofar as John the mysteriously surname-less painter has done a good job of the paint dock, and has to go back to Spain (some municipal ordinance means he has to go and mow his lawn, apparently) at the beginning of May when the weather should be perfect.

But. Did I ever mention Jim's Bad Knee? Which started being bad last summer and has not really improved its behaviour much since. Well, it is supposedly being sorted out this week, and as such things naturally get worse before they get better (you will forgive me for eschewing the details) there is a fighting chance that it won't be better enough in time to be leaping about like a gazelle, up and down a 110 degree bank and balancing on a narrow ledge within the requisite three weeks. The paint's arrived though! 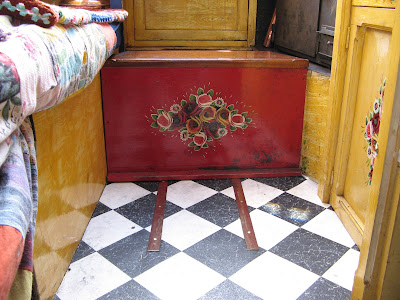 I finally did some work today and we sorted out all the accumulated Stuff in the back cabin and I gave it a bit of a clean (haven't touched the brass yet though, got to leave myself a treat to look forward to) and we got the brass runners for the coal box down. They do help! We do move the box quite a lot to look at the bilges and get at the stern gear, and this weedy modern vinyl probably isn't up to having a big wooden box full of coal dragged over it.
Posted by S at 8:21 PM

Hey - nice coal box!
Thank you for your kind comments on my ex-blog (I did respond, did you see?!) If you want them back, looks like you'll have to ask Granny B who has an indelible copy somewhere...for some reason...
Anyway, I wanted to say I'm not over sensitive but just lost interest when the blog overlapped with the forum. I'm hopelessly rootless and let it go as happily as I started it. I hope to have a little more loyalty to the fine blogs I read, such as yours.
Best wishes, Carrie

Hope we'll meet up some time.