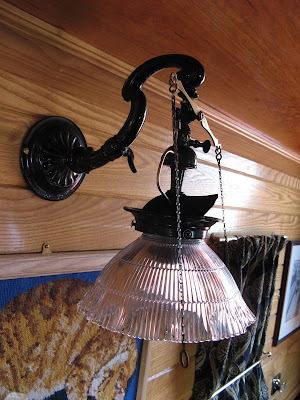 Jumble sales are definitely not what they were, but over the years we have built up quite a collection of treasures which, gradually, are finding homes. Those that haven't got a home in the house are getting a second chance on the boat.

This genuine gas light came from one of the jumbles we used to attend regularly in Plumpton. It's absolutely beautiful, isn't it. The shade we must have had for well over a decade, before it found its perfect partner. The initial idea was to convert it to a 12v light, but it proved impossible to get the wireing through the valves, and there was no way we were going to try taking it apart or drilling it. So it's basically just for decoration. I did stick one of those little Dot-It LED lights inside, but it fell out and broke the other saucer (just after having mended the first one). Although it's over a cupboard, we have developed a tendency to knock it with our heads, so will have to learn to be a bit more aware.

Decorative it may be, but it does have a function, discovered fortuitously after the event. When I'm sat in the corner of the sofa of an evening, reading a book, it shields my eyes from the glare of the light over Jim's chair, which in the past was something of an irritation.

I hear from Steve that he's going to stick with his pistons and liners, as ours have been rebored at some point, and his still have scope for doing it, which is what he's going to do. Hopefully he'll come over to Ramsey next time we're there to drop them back off and have a look at and a listen to the engine. I'm quite pleased really. It was the right thing to do, offering them, if they could have been of use to Steve and if they could have been used, sort of for their own sake, but I'm glad in the end that we get to keep them.

I mirror your sentiments. Thank you for offering them, but they are going back home ;-)