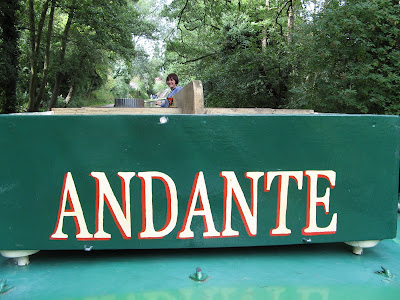 I used to have a lovely little boat called Andante, a 1986, 32' R&D. We bought her for me to live on while I was working in Huddersfield. She was bought from a very nice man called Mike, who lived on her in Newbury; he in turn was buying a bigger boat, Globetrotter. Andante was put onto a truck and taken to Huddersfield, where she sat fairly happily on the towpath for eighteen months, until I was offered a job in London.

Prior to selling Andante we had a fantastic trip bringing her down from Huddersfield to the Midlands, via the Standedge Tunnel. It was obviously sad to see her go, but by then we already had Warrior, having concluded on an earlier outing that Andante was really too small for more than one. Ironically, her new owner took her back to the K&A, where Mike has been keeping an eye out for her. 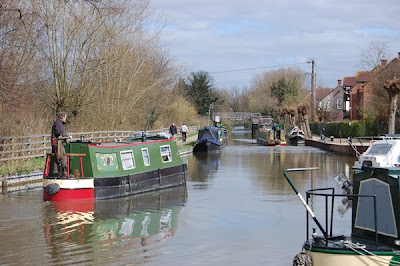 The other week, he saw her; unmistakeable despite having a. been repainted in a rather unpleasant shade of green and b. having had her name changed to Saxon. After twenty one years! I ask you. It's not as if she'd been called Foxy Lady, or something embarassing like that, after all. Actually, it's rather sad; although I only had the boat for eighteen months, and Mike, if I remember rightly for not much longer, I think the owners before that had had her almost from new, and had also lived on her. 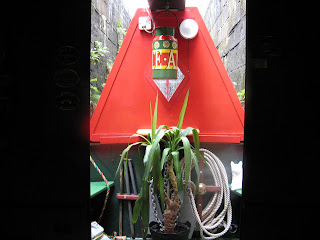 What also suddenly struck me, as I was going through my photos (you may recall that there was an album of about 180 photos on the Webshots site; I accidentally deleted it when I actually meant to delete one of six shots of her interior. I still have all the pics, but I'm buggered if I'm uploading them again.) was, what has the new owner (an old seadog, whom I didn't meet, perhaps fortunately) done with the lovely milk churn that Jim painted with Andante's name? And the roofbox, ditto? I'd have kept the churn if I'd known he was going to do that.

Anyway, here's Andante as she was in the summer of 2006, on the Huddersfield Narrow just up from Slaithwaite.


P.S. Fiona from nb Epiphany has also seen Andante on her travels - it's nice to hear that she's getting around. 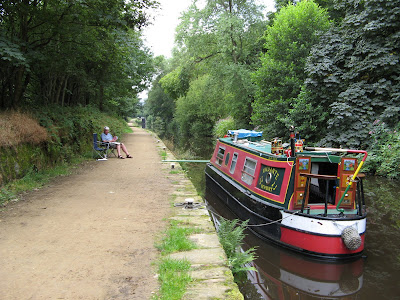 Hi Sarah, Not sure if you follow our blog but you might just see "Andante" now "Saxon" here!On this link http://nbepiphany.blogspot.com/2008/03/hungerford-to-kintbury.html
We spoke briefly to the owner and his wife - they were returning to Nottingham. I didn't think they were very suitably dressed for the conditions, but each to his own!
Regards, Fiona

Thank's Fiona, that's interesting. That's definitely Andante in your photo. He's getting about a bit! Which is nice to know, actually.