We've had our chips 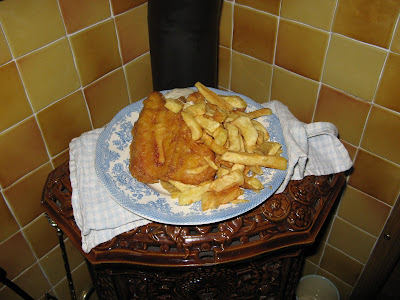 Funny things, chips. They've got to be right or they're wrong (just like that other English institution, the cup of tea). Chip shop chips are often something of a leap in the dark - although this is nonetheless preferable to the guaranteed, homogenised, quality-controlled-to-within-an-inch-of-their-lives chain fries. Will they be soggy or dry (they shouldn't really be crisp, well, only the little bits); will they be frozen or made from real potatoes? One would hope the latter in Ramsey, at the heart of potato-producing country. That, of course, is before you even got on to the fish.

I used to live in the flat over a fish and chip shop (the Newhaven Fish Bar, it's imaginatively called). They were - and still are - pretty good. At the time the fact that all my clothes and furniture smelt of chips was a small price to pay for post-marital independence. Go in there and there is quite a long price list, detailing the cost of, say, cod, haddock, plaice, skate, huss and so on. Most of the fish is fresh, as it should be, given that this is a fishing port and the fish are landed a few hundred yards down the road.

When we were in Brighouse, once, unexpectedly (this is when the prop bolt first sheared on Andante and we didn't carry a spare), we ended up in a chip shop. The price list said:
Fish - £1.95
Special - £3.95

That was it. After waiting for the chap in front (who was bemoaning the fact that he'd been down south, in Sheffield) to be served with chips and mushy peas in a bap, Jim asked, what are those nice big portions of fish there? Oh, said the lad behind the counter, that's the Special. So we had two of them. I think it was cod. The chips were awful. We were very depressed. But all was well in the morning because we got some nice new bolts from the lovely people at Sagar Marine. And Brighouse Basin was very nice. As another aside, I mentioned this to someone at work in London a while back and they said, oh, is Brighouse a real place then?

Anyway, I sometimes have what is here called huss, and which must be the most multiply-named fish in the country. It's often also called rock salmon. (And is it possibly the same thing as hake?) And apparently, in the Fens, rock eel, because that's what I had from the Madeira Fish Bar on Great Whyte the Friday before last. I was hoping for real eel, as it happened, on the grounds that it might be local, but no luck. I am happy to report, however, that the Madeira's chips were very good, and the Moomins think so too.

Jim came back from his hunting expedition with the thought that the proprietors of the Madeira Fish Bar might be Portugese, on account of they weren't speaking English and appeared to be Benfica supporters. Oh yes, I said, and the name might be a bit of a clue...

Talking of football, which I wasn't, Lewes have today assured their promotion to the Conference, and finally, after years of frustration because their ground, the splendidly named Dripping Pan, didn't meet the required standard, can now take their place in the national league. So three cheers, and raise your pint of Harveys to the Rooks, and now let's hear no more about it.
Posted by S at 7:33 PM