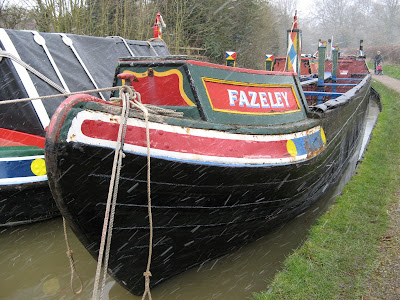 Until a couple of months ago I had never been to Stoke Bruerne; it was a mythical place, a place of wonder; a sort of canal shangri-la... the very name, redolent with history and adventure. Then we went there for Moley's birthday, and it was actually just a nice little canal village with a couple of pubs. I suppose I expected it to be bigger and more industrial because it is home to one of the three National Waterways Museums (or is it three branches of the National Waterways Museum?).

We went to the museum on that first visit and it was very disappointing. It might not have been, had our expectations not been unrealistically raised by their publicity and above all the prefix 'national'. I have been in many far, far bigger and better local museums. The collection is small and the presentation seems mainly geared towards children. There are some nice collections; of company seals and, my favourite, painted ware. There are some models, but I can never see the attraction of them; they look rather crude and lacking in detail. The working model of a lock wasn't working. There's a nice loop of old BW film which I watched a few times, and a waterways scene with stuffed (or possibly fake) birds, which seemed rather a waste of space. A few nice photos and a couple of old pub signs. The shop is pretty dire; on the second visit they were hard pushed to provide a pen and notebook (I now have a child's notebook with a large smiling ladybird on the front, and, a small indulgence, a pen featuring a moving (cruiser stern!) narrowboat which partly disappears under a bridge if you hold it at exactly the right angle). So half a cheer for the museum.

At Easter, the Historic Narrow Boat Owners Club holds a gathering at Stoke Bruerne. I am a member (second class, on account of not actually owning a historic boat; this is actually called associate membership but I know how I'd feel about people like me if I did have a real boat...) and was wondering whether to go along, but decided against it for precisely the above reason; I would have felt so inferior. Three things happened to make me change my mind on Easter Sunday afternoon: D3 Steve was going, so we could do the piston handover; I thought Andante Mike was there, although he turned out not to be, and, most tellingly, I hadn't left the boat for four days and I thought it had stopped snowing.

Well, it hadn't stopped snowing, but this meant most of the Historic Narrow Boat Owners were in the cafe or the pub, and anyway, I wasn't there as an associate member but just as a casual passer by. There were not many boats there, but enough to make it worthwhile, and I correctly identified a Small Woolwich (Dorado, as it turned out) from its fore end, which made my day.

I won't feel that I've really been to Stoke Bruerne, of course, until I've been there by boat.
Posted by S at 7:48 PM