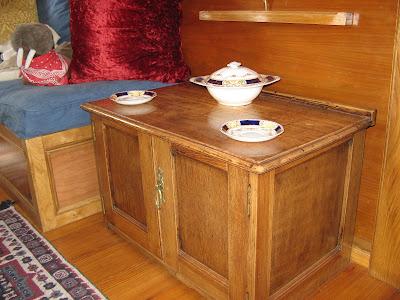 I know, this is all unbearably exciting, isn't it. We have a new cupboard on Warrior. Well, OK, it's an old (oak) cupboard that (surprise surprise) came from a jumble sale many years ago and until last month was in Sebastian's room housing his hi-fi. Following a minor shake-up in his accommodation arrangements, the cupboard became vacant; Jim started eyeing up the space on the boat where we had the other little cupboard; rubbed all the horrible dark stain off, varnished it, and hey presto, he now has somewhere (other than a bag on the bed) to keep his clothes.

You will note the attractive matching saucers, both of which subsequently contrived, in separate incidents, to get themselves broken, but having been superglued still serve adequately as coasters.

Also, there's a new batten on the wall for the table. The table was originally meant to go on the other wall, supported by the fitted cupboard that was already there. This was fine, until the sofa was made to go on the opposite side, and left very little space to squeeze between the corner of the sofa and the corner of the table. It made sense, and was easier, to use the table on the same side as the sofa, and we've got into the habit of doing this, with the table supported on the smaller (but taller) free standing cupboard, spaced to the right height with a suitable book wrapped in non-slip matting. Worked well, looked really good; easy to sit at and didn't get in the way. We could leave it up for days at a time in that position.

So using a nice iroko offcut finished with a spare bit of ash from, I think, the old kitchen, Jim put the batten up so that we can now have the table properly this side; it's got a hole so we can use its securing pin, and the cupboard is low enough under it to provide a useful extra surface.
Posted by S at 7:03 PM