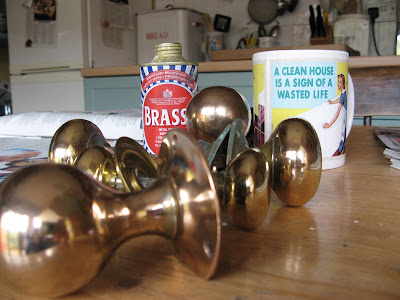 Another little job - my word, I am spinning this out, aren't I. It seems to me that the means of keeping doors closed on boats are often somewhat crude, tending to involve ball catches and/or bolts, and little else. Why should this be, I wondered; why is it not possible to get rim latches like we have at home, only, ideally, smaller? These have the inestimable advantage that once shut, the door can be opened from either side, which is a great boon in a door.

Small rim latches are available; they're intended for bathrooms and have an integral bolt, which is handy (for the bathroom, at any rate). So we bought three of these from the estimable Wades in Ramsey - a splendid shop; a sort of mini-GUM - fishing tackle to ironmongery to greetings cards to electrical goods, all under one slightly winding roof. I'm going to write about Ramsey's shops another time; they're really pretty good. Not quite Atherstone, maybe, but in some ways perhaps even better.

So, we have these three latches. Now, obviously, they need knobs on either side to operate them. and a shaft that goes through the middle - and this is the slightly tricky bit, because of course these doors are thinner than your average household doors, so the shafts have to be cut down, and if they have a thread on them or indentations for a grub screw to hold the knob in place then it complicates matters somewhat. 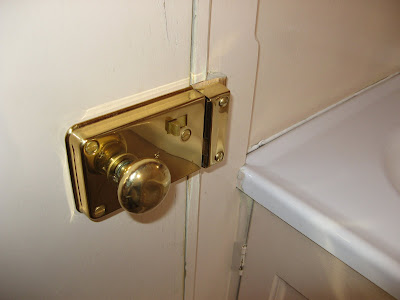 Of course, we chose to make things harder by utilising a selection of old knobs from the old doorknob drawer. More little bits of history incorporated into Warrior. The very small ones which we used on the bathroom came from the cottage of our splendid friends Glen the philosopher and his wife Linda, whom we scarcely see since they moved to Scotland. I have met their daughter Laura, but never their son Attila... (Glen's first book was dedicated to Linda and Liam; the second, after Laura's birth, to Linda and Liam and now Laura. Liam was the dog.)

The ones attached to their mounting plates were on Andante, attached to the top of the cupboard presumably as a nod towards traditional decoration. I took them off because they were in the way, but now they find another boaty home fulfilling their proper function. The last pair are off one of the doors which we got out of a skip and which now grace the upstairs rooms of the house.

So, fitting them was, in the end, a bit of a struggle, but in the now-familiar phrase (of one who didn't actually do any of the work) well worth it. We now have doors that can be opened from either side, and which shut with a marvellously satisfying clunk, and more decorative brass to polish.
Posted by S at 7:31 PM