Can you see the join? 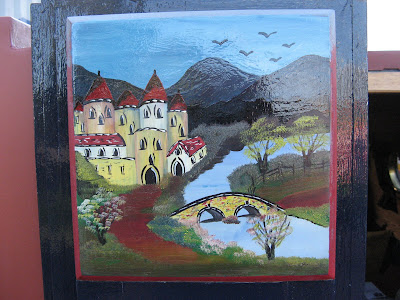 As usual, I forgot to take a 'before' photo of the damaged panel before I touched it up. I don't know how the damage was done, but by the time Jim had filled, rubbed and primed it (very nicely, I might add) it amounted to about the top third of the picture (the shiny bit). The sky, hills and turrets are my work; if you look closely you can see that the towers are a bit rubbed, but hopefully that'll disappear when it's varnished. I'm quite chuffed with it. It doesn't exactly match the original (the panel from the opposite hatch is below) but I had to work with the paints I'd got, and what the hell, I'm allowed my own style - more rolling downland than craggy peaks - but I think it compares OK. Actually, I don't think Warrior's castles are all that great, although I love the style of the roses. 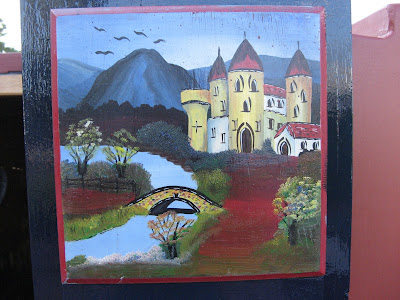 This is nbWarrior's 200th post. I must have speeded up a bit as we only hit the 100 mark around new year. Really I should have saved it for the starting of the engine. This didn't take place on Tuesday as planned, as modifications were still being made to the fuel filter, but is scheduled for tomorrow. The fuel system is now plumbed and has been checked for leaks (there weren't any) and the engine has been turned over. As I will be arriving tomorrow afternoon, I'm kind of hoping events will be held up until I get there - but with everyone on such a tight timetable I can't really expect them to wait for me. Also, apparently I get to fit the sight glass. I'm told that this is because I have 'nimble fingers' (have they seen my crocheting?) so no sexist stereotyping there then - I suspect that really it's so that if it gets broken in the process I won't be able to look reproachfully at anyone. Ooh the excitement - I can't wait!
Posted by S at 6:58 PM

Hi Sarah.
You have done a wonderful job with the castles, and don't let anyone tell you otherwise lol. No two castles are ever the same on any two doors. I think it looks fabulous. You should be very proud of yourself.
Congratulations on your 200th posting, I have a way to go on my blog.
Has that engine been started yet?
I hope you were there to see it happen. I know how excited I am at hearing ours going for the first time in the boat. We have a recording of it when it was at Tony Redshaws, but I want the real thing in the boat.
Well we know where to come when we want nimble fingers huh LOL.
Have a wonderful weekend.
Jo