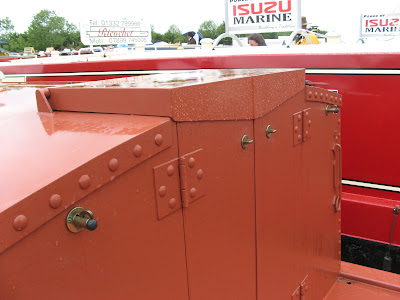 Most people seem pleased that they went to Crick on Saturday when the weather was relatively good. I'm quite glad that we went on Sunday, when it was pretty appalling. No leisurely wandering about for us; we had our shopping list and made a series of targeted assaults followed by a strategic withdrawal via the beer tent (note to organisers: if you are going to sell upwards of 20 splendid real ales, it might help to have someone on the bar who knows something about them, or failing that, some descriptions written up somewhere, else you get people like me paralysed like Buridan's ass, only ten times more so).
But we did go and have a look at the boats, and on the whole it was a depressing experience. If Sunday was a quiet day, then I dread to think what Saturday was like, as it was still pretty heaving around the basin. I'm sure some of the boats were very well made, and some were crap; and I'm sure that some of the builders are very sound businesses who provide excellent after sales service, while others were hoping to take enough deposits to hold the creditors off for another week, and I'm sure some of the prospective purchasers had done a great deal of research and were strongly committed to the canals and everything they stand for, but I bet more of them weren't.
One depressing thing was the sheer number of 'builders' (in some cases I think fitters would be a better term) turning out products that, while different from each other in various small ways, were generally undistinguished and all but indistinguishable. The only one that really caught the eye (and to be fair, we didn't look at the land based ones) was the Mel Davies/Lyons Boatyard tug - the same one they were exhibiting last year, but now with added paint. To my eye it stood out miles above the others - not just for quality, which you can't necessarily see with the naked eye, but for sheer swagger. Another depressing thing was that there were more people by far swarming over each of the other boats with their monogrammed-shirted salesmen and shiny brochures. And a third thing was the rather unworthy thought, looking at the potential customers, of do I want to be meeting some of these people on the cut?
Also, the Mel Davies boat has given Jim An Idea. For a long time he has been highly dissatisfied with Warrior's slides; he now has the idea of replacing the front one with a hinged hatch, as pictured above ... phase five, would we be up to now?
By the way, I see that Dover is finally 'under offer' - but they've had to throw in a new set of cloths. Watched the first few episodes of Narrowboat Afloat last night ... am I the only one to find Alan Herd intensely irritating?
Posted by S at 10:57 AM

Woooooooo Hooooooooo Sarah you have been thinking exactly like us about the boats at Crick. We went last year, and had similar thoughts to you about the number of builders come fitters, and how they are all a much of a muchness. We saw the Mel Davis boat in Primer red last year, and I thought the lines were fine, but had all the fiddly bits. I like plain and simple. I would be interested to see it now it is painted though.
We saw Dover when she was at the Preston Brook National Festival, whilst they were still painting her outside and absolutely hated what they had done to her. But each to their own I guess. I would of felt like I was living in a green house. So finally she is under offer huh. Maybe we will see her and her new owners on our cruise.
I am off to Etruria this Saturday.. Fingers crossed for the weather.
Great posting, keep it up... Jo

It's "Mel Davis Boatbuilders", no eee in Davis.