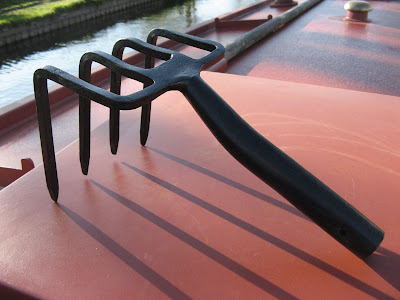 So there. Actually, until a couple of months ago I wouldn't even have known to call it that. I don't know whether it's a universal term or a peculiarly Midlands one; Woolfit refers to a rake in Idle Women, and it doesn't feature in Blagrave's glossary, although he does refer to the practice of kedging, which may or may not be etymologically connected. Anyway, I've wanted one for a long time so when we heard that Denis the blacksmith was tied up at Wheaton Aston we drove over yesterday evening to see if he had one or if not, to order one. And he did, so now we've got one. Just need to get a handle for it and Warrior will have another butch adornment. Who knows, we might even use it one day. (I'd like to think so.)
Posted by S at 7:23 AM

I have just read with interest about your Keb. We are looking to get one for our new working boat Hadar. Would you mind me asking how much you paid for your Keb?
I love the blog and will sit and read more.
Keep up the great work.

Hi Jo, I enjoy reading your blog too - it's one of my regular reads. We paid £15 which was much less than I expected. I wouldn't want to make one for that!

Hi Sarah.
Thank you for your reply.
£15 sounds a good price. Now I need another favour... How do we get hold of this Denis?
Does he operate from a boat?
Does he have a phone number so we could get one mailed to us, as we do not have a car?
I know sorry alot of questions hahahaha. Hope your weekend is going well.
Jo

Hi Sarah.
Thanks so much for all your help. I will have a word with Roger.
Have a good bank holiday monday.

I think you'll find its Denis Fellows and he operates from a working pair. His motor is called Joe Gilbert. We bought some mooring fittings from him but £15 for your keb (didn'k know what it was called either) sounds a bargain.

You will some pictures of Denis at work on our web album. see http://nbalbert.blogspot.com/