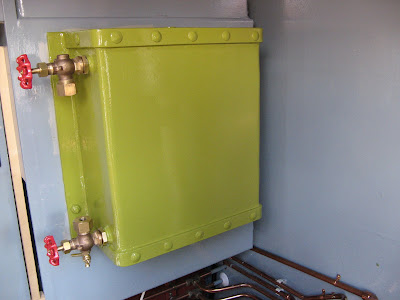 Today didn't get off to a terribly good start; I was supposed to be repainting the roof (with hindsight I'm not quite sure why) but that was once again thwarted by heavy showers. So another bitty day, but in the end not a bad tally of achievements. I did at least get the chimneys painted and polished (we are supposed to be getting new ones made, but I have no idea when, so I thought it would be wise to smarten the old ones up for now); got some painting done in the engine room, and finished the 'restoration' of the castle panel on the front hatch, which had been quite badly damaged for ages. I was quite pleased with the way that turned out, considering my complete lack of artistic talent. (You will note that all these achievements involve paint. Lucky me.) Jim got a front fender on (it's actually an ex rear one, but it will do - too good to throw away) and has started fitting the new rear ones now they've had a good soak in creosote (substitute). Yesterday (too wet to blog) I got the day tank painted, and in the days before that the tank had been put up (the new found sight glass is safely stowed in the (currently empty) beer cupboard until all the other work is completed) and the roof hatch finished.

But only a fortnight to go, and loads of niggly painting and touchingup of blacking still to do, which probably falls to me; the fuel system still to be plumbed; all the cleaning and polishing before we set off (me? I wonder); it is starting to feel like one of those races against time on TV programmes that I always assumed were engineered (when we used to watch TV, Salvage Squad was the one Baz and I particularly liked).

The engine is meant to be being started up on Tuesday, so I won't be here to see/hear/feel it (grrr).

Hint of the day: Scotchbrite and Brasso together are far more effective than either used separately or, indeed, consecutively.
Posted by S at 7:34 PM

Sarah.... Everything is coming together. The day tank look great, lovely paint job. The weather has somewhat improved today finally. Funny ow it is left to us girls to do the painting huh?

Awww I cannot wait to see our National engine started... Get someone to video it for you LOL.