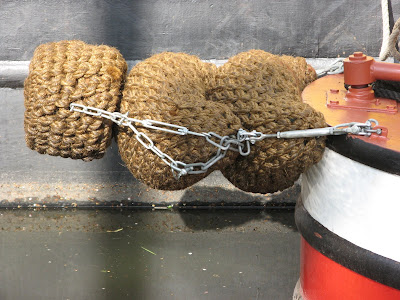 Nothing too scintillating here; I've just been going through the recent photos to see what I haven't written about yet. Well, the fenders are all finally fixed and hopefully secure. The front one was actually previously a rear one but it will do for now - it was too good to throw away. The rear ones I have written about before, but now they've had their soaking in creosote and have been banged and bashed into place and into shape. Not without mishap; they did all fall in once when one of the first set of bottle screws proved not to be up to the job. Luckily they were easily found and fished out, but being left on the deck for a week, the creosote took the paint off. 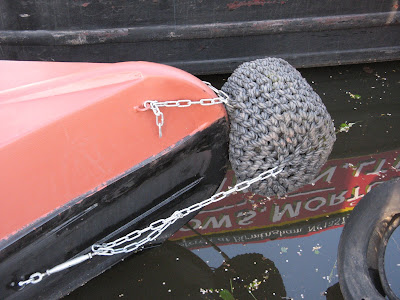 Jim's been on the phone today about our mooring at the rally - we've been allocated one on the towpath rather than in the basin, which the organisers stress 'are not to be considered "second class" moorings' (methinks they protest too much), so, we want at least to try to be on the inside (citing our easy-to-step-across foredeck as a good justification for this) so that people will be able to look at the engine! And as we only have hatches on one side, to achieve this we will also have to be facing the 'wrong' way. He has also volunteered us for working the bar - something I haven't done for over fifteen years and he, I suspect, for a lot longer. Still, I expect it's one of those things you never forget.
Posted by S at 8:38 PM

Good morning Sarah from wet Stone.
The fenders look great. I would not have thrown that fender away either, it looks way to good and as you say will do the job nicely. We have just ordered our fenders, from someone Roger uses and is reasonable with his prices.
Awwwwww what a shame you could not get a basin mooring, lol sounds like they are trying to convince you of the fact that they are not second class moorings. But I am sure you will work something out. Other boaters more often than not are accommadating if asked nicely LOL.
When we went to Preston Brook we were 2nd boat out, and Paddy would not cross the other boat, so we would pass him over to our next door neighbour, who then set him on dry ground. That was when he was a wimp hahaha, he is fine now now he knows that it is quite safe. I hope you get to moor by someone nice.
No point having a nice engine, if people cannot get to see it. We will be the same when we go to rallies. Still not much we can do about it, they put you where they can. I reckon our first rally will be Shackerstone in September all being well.
Anyway have a good week..... Jo

Sarah should you be using creosote? Isn't that recognised now as horribly toxic to wildlife? But I did a quick Google on the subject and couldn't come up an alternative - only people seeking one!

Hi Martin, no it is actually creosote substiture as sold by Wickes. I don't think you can get the real thing any more. I just got a bit fed up with writing creosote substitute all the time. Still takes paint off though. And we were careful to soak them in a dustbin well away from the canal (about 200 miles away in fact) and not just slosh it over as we went along! Isn't creosote a lovely word though?

I should have guessed. Yes it's a word to savour in the mouth - as is turpentine (substitute) :)