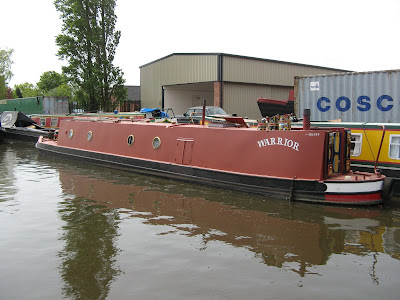 Looking at old pictures of Warrior you can see that really it sat far to high at the front and too low at that back. What you can't usually see is that it also had a fairly severe list to port. Now that the engine is back in we've been able to reballast the boat, which we did this morning. We moved a lot of existing ballast (eight of those bags of steel discs) from the engine room to the fore end.

Behind the head of the bed, right at the front, is the water tank, and either side of that there is space for ballast. There is also some on the inside of the boat at the bed head. At the moment this is covered by a blanket but a box will eventually be build to contain it more neatly. First of all we just placed it on the foredeck, all on the starboard side, to see what difference it made. Not very much really.

But we were also able to add extra ballast, thanks to Geoff, who has just removed a lot from Malpas. These were worn out teeth from a concrete crushing machine, lumps of cast steel weighing I would guess about five pounds each which pack together neatly. I don't know how many of these we put in; Jim reckons about 7 cwt in total, and they all went in the front on the starboard side.

The list is now cured, and the front now sits about four inches lower, and the back a good bit higher, with the counter just out of the water. We will have to see how well this works when we get the engine running and Warrior moving, but it's certainly a great improvement. Looking from across the canal it looks a lot more elegant and 'right'. I'd have liked to see the foredeck lower still, but maybe Warrior just wasn't built that way.

After we'd done that we went off to Norbury Junction for a sort of mini canal festival, which was nice, if a trifle chilly. But then I should have thought to take a cardigan, I suppose.
Posted by S at 4:14 PM