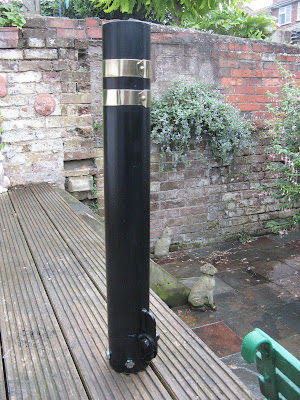 The prototype chimney has performed well in its sea trials, and has been brought home for finishing touches. Particularly pleasing is the fact that it doesn't rattle, and also that if the bolt in the hinge is sufficiently tight, the chimney collapses in a restrained and controlled fashion, rather than with a resounding clatter.

So it will now be taken back to Warrior (we are going up to Cowroast next weekend, to deposit all our luggage for the trip), and the lower part will be sealed onto the stump which Jim tells me is called a spigot. One of the improvements made yesterday was to shorten the bolts that hold it in place so that they don't protrude. A further refinement was the adaptation of a large Brasso tin as an extension to the chimney's height.

The other was the deployment of a small strip of brass that we found on Warrior when we bought the boat. Not quite long/wide enough for a perfect finish, but very satisfactory, and at last (fingers crossed) after all these years we have an engine pipe to be proud of.
Posted by S at 12:53 PM