Tanks on the drive 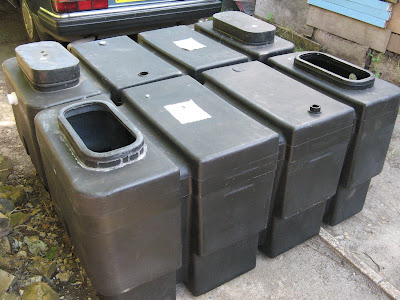 Well, I did it; I rang up Estates first thing this morning and the guy in charge seemed only too pleased for us to take away the two water tanks from my office building.

So we set off with the 240 estate and the roof rack, having been online and paid the congestion charge so that we could go up through London rather than round the M25 - at £8 it might be a useful deterrent to people driving in every day, but for an occasional visit it seems like good value for the convenience - and, I must say, TfL's websites generally seem to work very well.

As a result we were able to go the 'old fashioned' way; the way I remember going as a child before the M25 was built. Up the A23, Purley Way, Streatham High Road and Brixton Hill. I love this route with its plethora of magnificent thirties architecture, from the heyday of the motor car as a racy and glamorous means of transport, and the parades of shops; the only place that local independent shops now seem to have enough custon to survive. Although the butchers are now Halal and the haberdashers sell saris, in essence the scene hasn't changed for generations.

Without a hitch we found our way to Tavistock Square and loaded up the two 100 gallon tanks - one in the back (I shall be devastated when the last 240 disappears) and one on the roof. I had also taken the opportunity to pack up large amounts of books to take into the office, and to bring back two boxes of Tarporley photos.

It was a bonus to discover that one of the tanks still had its lids, and both were pretty clean; they seem almost new. Probably one at least will become a clean water tank for Chertsey rather than just being used for ballast.
Posted by S at 5:30 PM

I, too, shall be devastated when there are no more 240 estates left, as it will mean that mine (22years old and still going strong) will be gone.

Hi Sarah, not sure if youve seen these before but intermediate bulk containers are a very clever way of being able to affect the draught on working boats. The guy who had Darley a few years ago (whose name I have unforgivably forgotten) used these and managed to recycle some from a friendly farmer. Theyre the plastic tanks with mesh surrounding them in case you have seen them before.
Best wishes

Ah yes, Andy, I have seen them, but didn't know where one got them, or indeed what their original purpose was. I shall just be grabbing anything I come across I think. These are only a start but it did seem like fate that they appeared outside my office window the day after we made the offer!

They do seem perfect for what you need Sarah and manna from heaven when they appear in front of your eyes lol. The one with the lids still is definitely perfect for a fresh water container...bit more volume than a couple of water cans as well. The IBC's are handy as they have taps at the bottom for emptying and can look quite convincing as a 'load' for your hold.