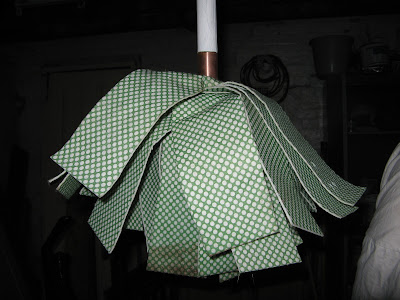 A while ago there was a thread on CWF telling you how to make one, so Jim took note and planned to do so. First we had to get a suitable shaft, which we finally purchased at Braunston. Eight foot of 1 1/4" diameter ash. Then there is the question of what rag to use for the mop head. Some people have suggested old coats ot old blankets, but I always had trouble working out where boatmen would have got these from - surely a new mop would have been needed far more often than an old coat was discarded. Then someone posted on CWF that a popular material was 'Croxley blanket', a kind of absorbant felt used in paper manufacture.

It occurred to me that the synthetic felt that these thick cleaning cloths, from the local market, are made out of might be a reasonable equivalent - and as they are the same stuff that modern mops are made of, would probably be pretty effective. So we settled on using strips of this. 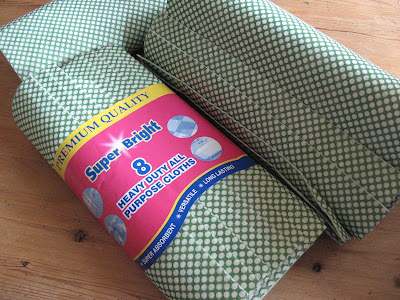 First, Jim made a ferrule out of a piece of copper pipe and fitted it to the end of the shaft. This is to stop it splitting when the screw is put in to hold the strips in place. Then he made two large rubber washers, to go either side of the strips, and finally a metal washer before it is all screwed on. How to stop the screw and washer scratching paintwork etc when in use was a bit of a problem. The instructions talked about putting a leather strip around the whole assembly, but we couldn't see how the screw could be screwed in then (perhaps it should have been a nail). Anyway, we solved that by the simple expedient of getting the last strip and sewing it together over the screw.

The shaft is now primed ready for painting in Warrior's colours. We're not goung to attempt spirals, but will stick to simple bands. It may not be 100% traditional - whatever that might mean - but hopefully it will be an attractive, and more importantly, useful, addition to the boat.
Posted by S at 3:54 PM

You have far too much time on your hands!

hi Sarah
sorry to be so picky but why would you want to stand on your roof and try and dip your mop in the canal? is your house built alongside the canal?
If we don't have it right then history is changed forever. A house has a roof. Boats have a 'cabin top'. And so you would say put the mop on the cabin top. (and if you get your big Woolwich like you want you will be expected to speak propper.
Cheers
Blossom.

PS By the way it was me that spoke of Croxley blanket and I think your mop material is an excellent idea and will, i'm sure, look great on Warior's cabin top.

PPS Croxley blanket was not a felt material but an open weave cotton material. I shall have to photograph my mop head and show you.

Sorry Malcolm, you are absolutely right, and you probably know that I am usually very hot on using the right terms (and I did know). I was just more in a writing-for-a-non-specialist-audience mindset, but you make a very good point, it is all the more important to get it right then. I won't correct it now but will let your comment be read and serve as a lesson. Thank you very much for reading and commenting.

Even better, I have done my first ever HTML editing!

hi sarah.
my name is carl and i have just read your blog on the jan 6th 2008. you mention that your boat was painted by a martin duiker i was wondering if you would mind emailing me more info about him. it would mean a lot to me thanks carl.
e mail carlosward21@hotmail.co.uk