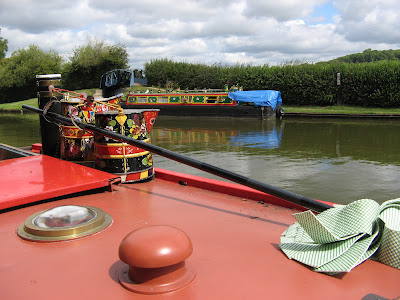 Here is the new mop, in its rightful place. You can see by the state of the paintwork on which it's resting that it hasn't yet been deployed at this stage, but it poses nicely. Savour its subtle stripes of black and dark grey. Now when I said it was going to be painted in Warrior's colours I had more in mind the red and cream, with perhaps some black or grey to set it off. Unfortunately, we didn't have any cream - that was all John the signwriter's - and we couldn't find the red. I was sure we'd bought a whole new tin of Craftmaster, but if we did. it's disappeared. Hence the rather understated and inadvertantly tasteful tones of the mop.

However, I am delighted to report that is swabs down really well. It holds a hell of a lot of water, which has to be squeezed out by treading on it, as the one design feature it lacks is the ability to spin; being fixed by just one central screw, the head rotates on the shaft if you try to spin it dry. Perhaps it should have had two nails (no room for two screws) but too late now. Anyway, notwithstanding that, it works really well, and the long shaft really is a boon.

Today I've been out nominally in charge of Tarporley again; it was a lovely day, perfect weather. Sadly the customers this time spent most of their time inside bent over worksheets of various sorts. I enjoyed it though. Didn't even nearly hit anything this time.
Posted by S at 9:58 PM