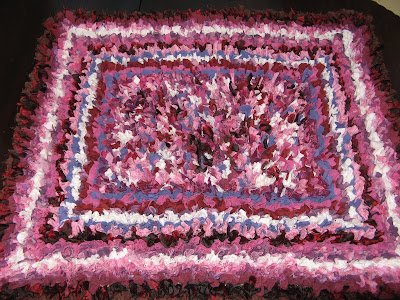 I have just completed my third rug. The first sits in Warrior's back cabin, now on the side bed; the second was made as a present for someone else, and this one is, hopefully (my record is not good, viz the two-inch-too-wide seat boxes) made to measure for the other part of the side bed.

The original one, despite hardly ever having been on the floor (and when it was, I stepped over it) is now looking suitably used. Most of this was achieved in one simple procedure of Jim putting a creosote (substitute!) soaked fender down on it.

I am well aware that having rugs on the bed is not 'traditional' - in fact, I learn that there may have not really have been any tradition of having or making them on boats - but they are nice to sit on, and I am very taken with the visual effect of the way the tufts curl. I might try something more ambitious - and even less traditional - next time. It's the cutting up the strips of fabric that's the gutty part; actually making the rug is great fun and very rewarding. Unlike the last two, which were made on rug canvas that I had left over from an earlier project, this one is made on a fairly course hessian - the sort that garden centres sell for wrapping up your yuccas in the winter. I thought that it would be harder, but once I had decided on the spacing, it was no more difficult. The other day Jim was at Travis Perkins and saw a man with a lot of hessian sacks - empty sandbags, at 45p each, so I have asked him to get me some to play with.

Warrior came with a full set of upholstered cushions in the back cabin, plus a full set for the cross bed, all in very firm foam (well, they were built to support John Shotbolt) covered in luxurious royal blue dralon. You've guessed it - I couldn't stand them. They were too hard to sleep on comfortably, the devil to pack away in the cupboard, and the ones on the side bed just got in the way and collected dirt. So now they have all gone. We might be able to use some of them on Helyn (note to self: do Apollo Duck ad soon!). I was impressed when I stayed on Chiswick with how comfortable the softer, thinner foam mattress was, that just rolled up into the bed cupboard, so we might get round to getting one like that made. In the meantime, if we have unexpected overnight guests (well, guest, actually; our cross bed accomodates one person and a calorifier, but they do have warm feet), then they can take the cushions out of the saloon. And they will have a pretty rug to look at.
Posted by S at 7:50 PM

I can see that cutting fabric strips in large quantity can be tedious, especially if you are doing it with scissors. Strips can be cut quite quickly using tools designed for patchwork quilters - rotary cutter, cutting mat and cutting rule. While you might not want to buy these, you might find a patchworker willing to barter the use of them for a new blade or two for the cutter. One can stack fabric and cut four to eight strips at a time depending on the thickness. It's a great time saver and much easier on the hands. I think the new rug is gorgeous!

Michelle, wishing I were there on Nb Shilling

That sounds like a good idea Michelle - I'll look into it. Woven fabric I tear into strips, but jersey I have to cut. I was interested to discover that the two types can be intermixed without apparent ill effect!