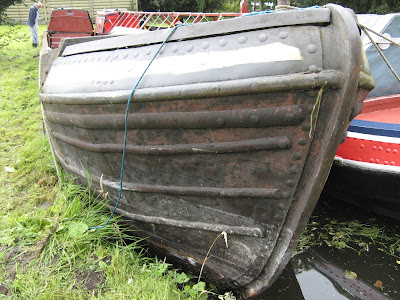 Yesterday was a truly momentous day. Not only did we sell Helyn, but I also learnt, after two and a half nail biting days of waiting, that my offer had been accepted for Chertsey. Yes, I have my big Woolwich at last. And it is an absolute stunner.

This all happened very quickly. I've been looking out for one for a while, as you might have guessed, and since January, looking seriously. I had my eye on one (that I'm still fond of) for a long time, but the price was too high for a restoration project, especially as it needed a lot of work. Nonetheless, I decided, driving back from Braunston, that I would arrange the finance so that I could make an offer - it would have been a rather low one, but whether or not it was accepted would have decided the matter for me.

Meanwhile, on the way to Braunston, Jim had got chatting with the owner of Petrel - who wasn't actually going to the rally - and mentioned in passing, like you do, oooh, my missus, she's so mad she wants a big Woolwich..... And he said he knew of one for sale. Jim gave him our number, and to be honest I didn't expect to hear anything, but a couple of weeks later, I took a phone call from the man who was handling the sale of Chertsey on behalf of the executors. On the phone, it didn't sound a great proposition - abandoned for eight years, no gunnels, full of rainwater, engine seized - but we arranged to go and view it, thinking it would be more for research purposes than anything.

Well, as soon as we saw it, we could see it was a brilliant boat; very straight, very original, and very sound. Not trusting our own judgement, we had taken an expert along with us, and he was in agreement. So we offered the asking price there and then, but still had to wait for a bit of backwards-and-forwards-ing with the executors before it was accepted.

And now it has been, and the fun begins. It should be exciting, but I'm almost still in shock, as it all happened so fast.

There are some more photos here, and a little bit of info about the boat in this CWF thread.
Posted by S at 6:30 AM

Well let me the first to say Congratulations!..and....you are quite barking!
What an adventure!
Three exclamation marks, I know: but justified I'm sure

We will be second to send you are congratulations. So pleased you have found what you have been dreaming about. Now the hard work begins to get her ship shape and Bristol fashion. I am sure you are going to have loads of fun with her.
Jo xx

Congratulations you fool. I'll look forward to following the story - as I enjoy following this blog

My son tells me you are the fortunate new owners of Chertsey.
We have happy memories of an encounter in 1964 at the momentous Stratford on Avon Rally.
We moored up on the Avon opposite the theatre in Vesta with Spitfire
alongside.
Late in the evening Chertsey arrived having struggled down David Hutchings narrow canal and tied up alongside.After a brief chat we settled down, with all our children asleep, for a welcome night.
Early next morning we awoke to a deep throbbing vibration followed by heavenly music. Chertsey had a large organ installed which provided entertainment for the rest of the event.
We hope to open the Droiwich Canals early next year and would be pleased to see you there.
Good Luck and happy boating.
Max Sinclair. Life President Droitwich Canals Ltd.

Thank you Max. I will try to get in touch via CWF.