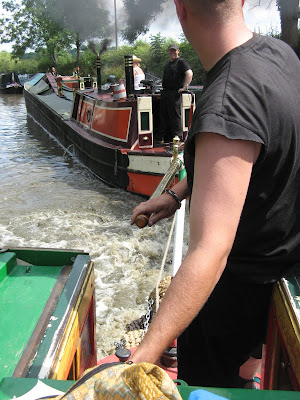 Oh, it seems so long ago now. On our final full day at Braunston we joined the parade again, this time both hitching a lift on Chiswick. It was a one way trip this time, as they were off to Oxford, so we hopped off at the turn. Highlights included passing Victoria just before the turn, snapping away (Sarah, I said sternly to myself, just how many photos of Victoria's fore end do you actually need?), and James and Mike deciding to have an impromptu tug of war - a rope was quickly thrown and attached, and they were off. After a couple of minutes an honourable draw was declared and we went our separate ways. Almost the best bit was watching a woman watching us from one of the modern boats moored on the towpath. She had a glass of wine in her hand, and never took her eyes off us, remaining completely expressionless throughout. No amusement; no anger or disgust; not even any bemusement. Nothing. You have to wonder why people like that bother staying alive, let along going boating.
Posted by S at 12:44 PM

Perhaps a case of 'all the lights were on and no-one was Home?!!'