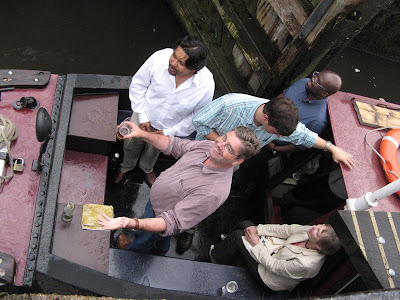 Yesterday we had an 'awayday' at work; it's because our whole institution is being reorganised, and I'm going to be part of an entirely new department. We mostly already know each other (there are thirteen of us), but there are a few people I didn't know very well. The awayday was about planning the department's priorities and how to make it successful, and wasn't nearly as bad as it might have been - there was some stuff that was a bit cringy, but mostly it was focussed on practicalities and hopefully will have established some concrete plans to get us off to a good start.

Anyway, enough of that - which is what we all thought at the end of the day. Months ago, at one of our earliest meetings, I suggested that a trip on Tarporley might be a good way for us to get to know each other better, and have fun (although obviously for budgetary purposes it was a teambuilding event), and it was decided that after the awayday would be the ideal time, so five o'clock saw us emerging from the tube at Camden Town, me trying to keep the party together like an ineffectual school teacher, and making our way up to where John and Peter were waiting for us above Hampstead Road lock.

I'd been dithering as to which way we should go; the original plan had been to go west, towards Little Venice, although I had thought that we wouldn't have time to get there. The alternative was to go east through Islington tunnel and beyond, but I wasn't sure how far we would get that way either. John said that although we wouldn't have time to stop there, as I was a 'special' customer (!) we could go to Little Venice, turn around and come straight back, so that's what we decided to do.

The supplies that Ben and I had laid in on Monday were, where appropriate, nicely chilled, and we poured, dished up, and distributed. Everyone seemed to enjoy themselves. The weather could have behaved a bit better, but at least the rain stopped some times, and some people didn't mind it at all. Nearly all the drink was drunk and the washing up was done, as we drew up to Tarporley's Kings Place mooring... and sailed straight past! John had forgotten that we weren't going east as well! This caused some consternation as people had planned what trains they were going to get back from there at around eight o'clock... instead we proceeded to City Road lock, where a number of passengers disembarked, and Peter escorted them to Angel, from where, we hope, they safely found their way home (Jane having joined us earlier).

The remaining interpid souls opened the last bottle of red wine and enjoyed the experience of going down a lock for the first time (we couldn't wind below City Road because of boats moored there), and through the tunnel again, and it was some time after nine when we got back to Kings Place and finally tied up at the end of what had been a very long day. Still, it has been suggested that we make it an annual event, which certainly sounds like a good idea to me!
Posted by S at 7:27 PM