Getting out is easier than getting in 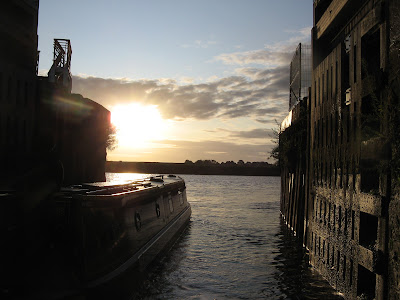 Another boat leaves Keadby Lock ahead of us this morning

As I write this sitting on the foredeck, once more beneath the gloriously illuminated walls of Newark Castle, it seems a long time since the alarm went off at 5.45 this morning. We went into the lock at 6.30, and said goodbye to Severn as the waited to come out after us. They were planning to stop off at Torksey, but the lockkeeper told us that as it was a high spring tide we should have no trouble getting all the way to Cromwell, and he was right; the six and a quarter hour journey was uneventful but the time flew by and layers of clothing gradually came off as the day warmed up.

Having got safely to Cromwell lock, we continued on to Newark, and are once again tied up on the wall below the town lock, albeit a little further back this time. I've been into town and got a new stapler and a new SD card for the camera as the old one is nearlt full. In the past I've downloaded photos as I've gone along but this time have decided to leave them all until we get home.

After a nice long chat with the people tied up in front of us (even though they have got a bowthruster) we got our glad rags on (well, I did go to Primark in Doncaster) and went off the the Fox and Crown again. It definitely seems to be my kind of pub. They had London Pride on tonight and boring git that I am, that's what I had, but they pulled it through a sparkler and it turned it into a completely different drink. But - and this is the good bit - I said, If I were to have another one, in a few minutes.... and the barman said, 'Sparkler off?' So I had another pint on the strength of that. We also ate, and once again the food was good; and I found a box of games and struggled to remember the rules of the version of dominoes that we learnt at Floods Ferry. I think I cracked the main points eventually - it's a version of fives and threes, and you score points for whatever multiple of five or three the pips at each end add up to (so 6=2, 5=1, 12=4, 18=6 and 15=8 because you count it for fives and threes). Then they had a band on, which was a bit loud and they weren't very good, so we came back, and in the distance can hear a party going on on the trip boat.
Posted by S at 9:04 PM