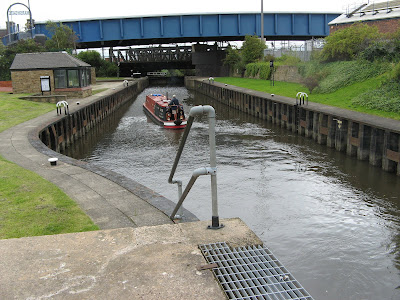 Day 19, Doncaster to Sprotbrough lock and, er, back to Doncaster

Last night we made a decision. We had thought that it might be a good idea to take Warrior to Stretton (on the Shroppie) to use as a base while working on Chertsey. We thought that to achieve this, we would go back down the Trent and via the Trent and Mersey. But looking at the time we had available, and consulting Canalplan, I made the case that we could just about achieve the same destination within the alloted time if we went via the Aire and Calder, Calder and Hebble, Rochdale, Bridgewater, T&M, and Middlewich Branch*, and thus avoid retracing our steps, and take in some of the waterways we originally planned to visit. This will be very tight for time though.

So, we set off for Sheffield this morning, and at Sprotbrough lock, met a woman who reminded us that we needed to book our passage up the Tinsley flight. So we rang the lock keeper, who seemed very unimpressed by the idea that anyone might want to use his locks, and said he couldn't possibly fit us in until Saturday. Having hoped to go up this afternoon, this was a bit of a blow to our plans. Jim had already been expressing doubts about the Sheffield detour, and this was the final straw that made me also reluctantly give up on the idea of this fine city which I have never yet visited. We turned round and came back through the two locks we'd just been down, including the very large Doncaster lock, in which you can see Warrior looking lost in the photo. Yes, that really is a lock. Operating the upstream end involves standing with a railway bridge about a foot above your head. When we got back to Doncaster, we met up with a boat we'd come through Keadby with (and also met on the Chesterfield) and they said that when they'd phoned to book passage up Tinsley, the keeper had effectively said 'What do you want to do that for?' And people wonder why Sheffield Basin is empty.

*Having just taken notice of the postings on Canalworld about a stoppage on the Shroppie at Shebdon, I think I'd better think it out again, again..... Ashton, Peak Forest?
Posted by S at 7:41 PM

Pity about not doing Sheffield: was just about to get into gate-pushing, camera-clicking mode for tomorrow (Suppose it's today now) morning. Ho hummm.

Yes the Tinsley lockies make it as hard as possible to get to Sheffield: try asking for an afternoon passage up the locks: they are supposed to be open but grumpiness precludes this happening, reason quoted as having to relock the locks before knocking-off-time.

When Yorkshire do the bookings through the Office (Standedge) the whole thing gets out-of-step with what's happening on-the-bank, and when they do the booking direct-to-bank (Sheffield), they dissuade boaters from doing the trip.

Good luck with the Rochdale!.... and the bookings of Summit, Manchester, and Tuel-Lane opening hours :-) All controlled by Wigan of course, so that's 'different' (not necessarily 'better')

Shame about missing Sheffield; you'd have loved the industrial landscape, and actually the "regeneration" architecture is a bit thought-provoking. Good pubs , too.

Who pays the lock-keepers, he harumphed!

Sounds extra-cool to be deciding where to go even after weeks afloat. What is the plan, now?