The River Trent is deep and wide 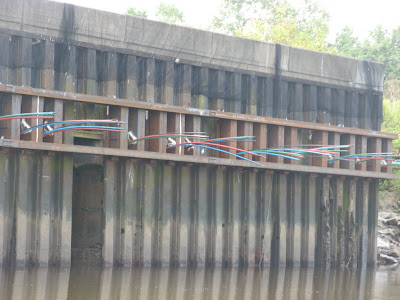 And the Chesterfield Canal isn't.

Another day of contrasts. Up at five thirty, in a chilly grey morning, all ready to go through Cromwell Lock at six twenty two precisely (as if it would take us precisely six hours to get to West Stockwith). As it happened, we could have started at least an hour later; we were going deliberately slowly, and still arrived early, but it was still fine, and Jim made a lovely entrance into West Stockwith lock without touching the sides. We managed to spin it out to over five hours; five hours of chill grey morning most of which I spent sitting on the foredeck in a folding chair, wrapped in many layers and with a blanket over my knees (well, who was watching, apart from a few fishermen). There was a little bit of industry, and a lot of birds, but mostly just river, wide and slow and not (as yet) very scary. You could tell the tide was going down by the increasingly revealed mud, but that was about all. Thanks to the Trent Boating Association charts kindly lent to us by Dave and Izzy, we were able (again, so far... touching wood here) to avoid running aground, and, thanks to Jim's new toy, his VHF radio (and thanks to me reading the instructions on replacing the batteries...) we were able to keep in touch with the lock keepers and it was all a very calm and well ordered experience. The West Stockwith lock keeper even alerted us that a gravel barge was on its way, so we were able to see one without being thrown into a tizz by it. Of all the essential kit they tell you you need for the river, and rivers in general, they never mention binoculars. I find these (purchased in Boots by my father circa 1973) invaluable for spotting mooring sites and particularly for reading signs and notices before it is too late - BW do have a tendency to scrimp on type size, but the EA are, if anything, even worse. You could even use them to look at wildlife, if that's what you're into.

So at noon we exited West Stockwith and were on the Chesterfield Canal. At first this was stunningly clear, and I could see lots of fish. But it wasn't long before it became quite muddy, and it is very shallow. Going is exceedingly slow. Surprisingly there are quite a few boats on here, hopefully not all nosing their way up to the dead end. I'm not complaining about the shallowness mind; only too aware that only a matter of decades ago this canal was derelict; even fifteen years ago, when the guide - again lent by Dave and Izzy - was published, it stopped a good way and a great many locks short of where it does now. However, as we are determined to get to the end - which is now the Norwood Tunnel - we may have to revise our plans for the rest of trip. I will not relinquish Sheffield, but after that we may be very pushed for time.

Shall we have a random photo tonight? I will compile a nice album when I get home, but for tonight we have.... Hmm. Piling with mysterious cables protruding. It took long enough to upload - I'm not changing it now!
Posted by S at 8:06 PM