Having a smashing time 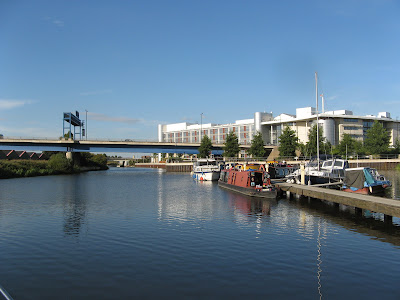 This does feel exotic. On a lovely secure visitor mooring and about to hit one or two of the numerous CAMRA-recommended pubs of Doncaster.

Today we had a bit of adventure at last, viz getting into Keadby lock. West Stockwith was a doddle compared to this. We were locked through West Stockwith at 0840, and after a couple more hours of fairly featureless but increasingly muddy Trent, were approaching where Keadby Lock should have been. We'd been warned that the entrance is sometimes obscured by coasters, but this wasn't the problem - looking through the binoculars I could see a big, painted 'KEADBY LOCK' on the wall, and a rather sweet art deco style lock building, but where was the bloody entrance? Out of sight round a hairpin bend was the answer. Now, I know you are meant to turn and approach from downstream, and Jim had tried to check with the lock keeper, who hadn't replied, but the guy at West Stockwith had said it wasn't always necessary. Anyway, in what I suspect was an agony of indecision, we turned, with hindsight, too soon to approach upstream, but too late to try and go straight in. I was hiding inside looking through the porthole, hoping that the entrance would approach faster than the wall. I thought we were going to make it, but we hit the wall pretty hard, occasioning much breaking of crockery (it could have been worse, a lot of it landed on the sofa) and another of my treasured stolen glasses (Directors this time). Did you know that pub glasses are now made of safety glass, to stop people being 'glassed', so when you smash one it really does look like a car crash. We also lost a windlass off the roof and dislodged the front fender, but the people already in the lock had their own tales of breakages too, and the lockkeeper at West Stockwith did say everyone ballses it up. I think with a bit of practice we might get the hang of it.

After Keadby we were on the Sheffield asnd South Yorkshire Navigations, an agglommeration of waterways which today included the Stainforth and Keadby Canal and the River Don. These are big and wide, and have numerous large swing and lift bridges, and big locks - some of which are electric (most of the bridges are). The weather has been windy, which has been a bit of a nuisance, but not uncomfortable because of the marvellous hot sun.
Posted by S at 6:31 PM

I think I need a new camera (or, at least, a clean lens) - your picture is so very SHARP! Perhaps I should ask Father Christmas for a proper digital SLR. Swings and roundabouts, though: I'm less likely to carry a chunky SLR than my handy (but sometimes annoyingly automatic) compact.

Sorry to hear about the internal breakages (and external losses). Hope the steelwork wasn't too dented!

Oooh, oooh, Granny reads my blog. Even if only to brag. Halfie - the camera is only a compast, a Canon A700, but it is good I must say. No dents - Warrior's a solid old thing. Even salvaged the front fender and reattached it today. I still have a Praktika SLR that I got when I was 17 that I use for taking fancy photos, but I didn't even bring it this time - wish I had though; the little Canon isn't very good in low light.